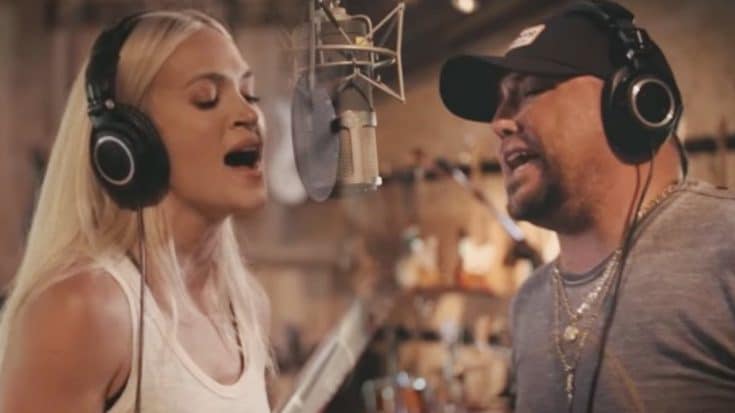 On Wednesday (July 21), Jason Aldean began teasing a new duet titled “If I Didn’t Love You.”

Aldean kept his duet partner’s identity a secret in his initial post, and asked his fans to guess who was singing with him. There were many different guesses…and a few fans got it right.

We've got a brand new song coming your way this Friday! Who do y'all think is singing on this one with me?? #IfIDidntLoveYou pic.twitter.com/WUxi6jYJzF

Some fans cranked up the brightness on the image Aldean shared, and in doing so, revealed a photo of another artists under the green overlay. That photo depicted Carrie Underwood!

After letting fans sit on their discovery for a while, Aldean and Underwood confirmed she was his secret duet partner. Underwood took to her Instagram Story and shared Aldean’s image with a raised hand emoji, seeming to say “It’s me!”

Aldean later confirmed Underwood’s involvement in the song by sharing the complete art for “If I Didn’t Love You.”

Back in 2010, Aldean and Underwood performed Guns N’ Roses’ “Paradise City” together during CMA Fest. The hard rockin’ performance was a big hit with the crowd!

The tone of “If I Didn’t Love You” is nothing like Aldean and Underwood’s “Paradise City” cover from 11 years ago. It’s (mostly) a much softer, passionate song that tells a tale of two people in love.

However, even though the two narrators love each other deeply, they have broken up. They sing about the heartache they feel and how hard it is for them to move on. In the end, they know full well if they didn’t love each other as much as they do, it would be much easier for them to get over their feelings.

Some of the most powerful lyrics are, “If I didn’t love you I’d be good by now, I’d be better than barely getting by somehow…“

Aldean and Underwood released a lyric video to accompany their duet, so you can quickly learn all of the words to the song. Tune in to that lyric video below.

Many fans commented about how long they’ve waited for a duet from Aldean and Underwood. After hearing “If I Didn’t Love You,” they feel the wait was well worth it!