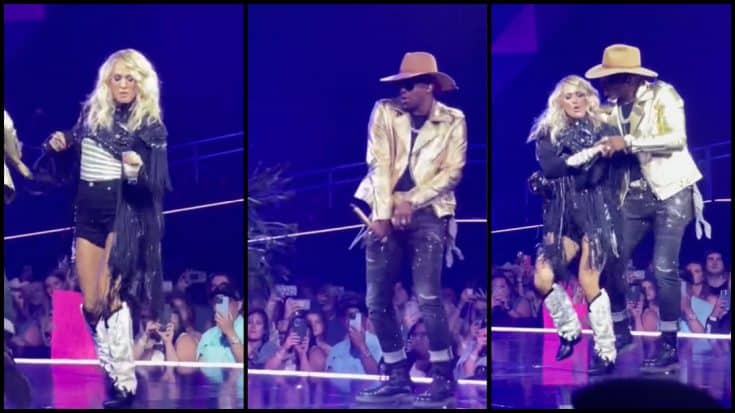 Carrie Underwood kicked off her much-anticipated Denim & Rhinestones Tour in Greenville, South Carolina, last weekend, and the singer showed off more than her vocal prowess during the concert.

Carrie Underwood pulled out all the stops for the opening night of her new tour. The “Ghost Story” singer flew over the crowd, showed off her insane drumming abilities, and joined her opening act, Jimmie Allen, for a duet of “Denim & Rhinestones.” During her collab with Allen, the pair performed what appeared to be a choreographed dance.

Fans shared their love for the dance and the artists in the comments. “Love this! And such a huge fan of both of them,” one fan wrote. Another wrote, “I love this so much!”

Jimmie Allen will be joining Carrie for all stops on the 43-city tour that will conclude in Seattle on March 17. When it came to choosing an opening act, Allen was the perfect choice, according to Underwood.

“I felt like he made sense. He embodies denim & rhinestones, almost as much as I did,” Underwood told Country Countdown USA.

“At least we know we will have a lot of bling, and plenty of rhinestones for wardrobe. We may even get together on stage. It’s always a shame, if I was to have somebody like him out, it would be a shame not to get to sing with him while we’re on stage,” Carrie added.