By Miranda Raye on December 14, 2021
Advertisement 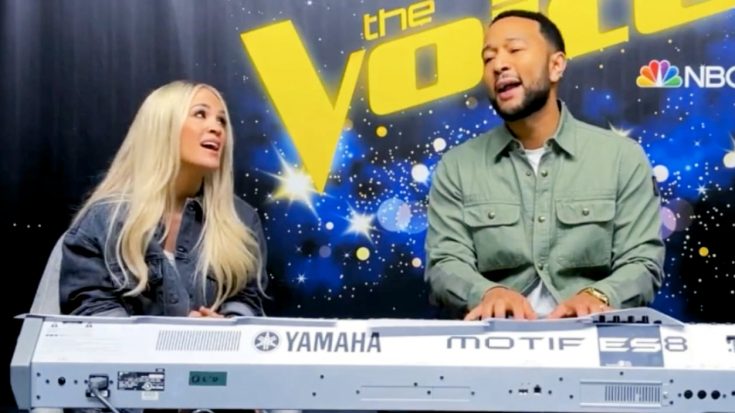 As Season 21 came to a close, The Voice announced who would be performing during the season finale. Among the list of performers were coach Kelly Clarkson, former coach Alicia Keys, and the season’s mega mentor Ed Sheeran.

The Voice also announced that country superstar Carrie Underwood would be joining coach John Legend for a performance of their song “Hallelujah.”

Underwood was already on The Voice set before the Tuesday night (December 14) results show. While hanging out with Legend backstage, she joined him to sing another Voice coach’s song.

The duo opted to sing “Austin,” which was coach Blake Shelton‘s breakout hit. The song reached the #1 spot on the Hot Country Songs chart following its release in 2001.

2021 marked 20 years since “Austin” was released. Shelton celebrated this anniversary by delivering a special performance of the song during the ACM Awards in April.

Legend and Underwood shared their performance of “Austin” in a video for Legend’s “Trailer Talk” series on social media. Underwood was the one who suggested they sing a song of Shelton’s, saying Legend could “show him how it’s done.”

The two took turns trading lines for most of the song, but there were a few moments when they sang together. Shelton ended up watching their performance, and had a priceless response.

“D— y’all..” Shelton commented on their video, which you can watch below. Underwood and Legend have shown they make a great team!