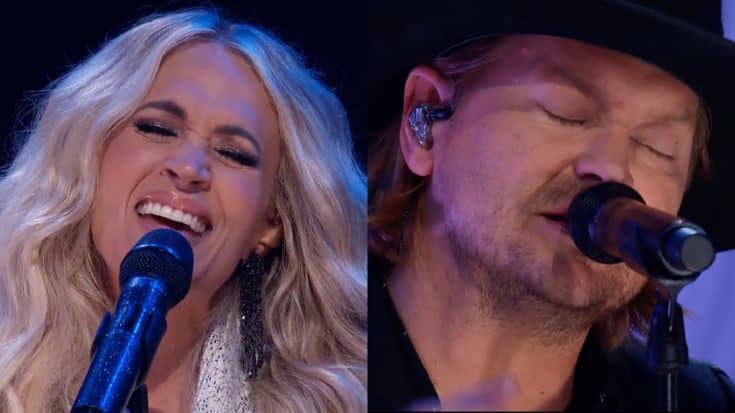 Nominated for multiple awards during the 2021 CMT Music Awards, Carrie Underwood was also invited to perform as one of the night’s headlining acts – and she brought along a very special guest: NEEDTOBREATHE!

.@CarrieUnderwood and @NeedtoBreathe's 'I Want to Remember' is melodic and forceful, with Carrie and Bear Rinehart trading vocal fireworks. Sounds like a hit to these ears. pic.twitter.com/DEU7IGPFgs

The pair have collaborated on several projects recently – one where lead singer Bear Rineheart provided backup vocals for Underwood’s “Nothing But The Blood Of Jesus” and again where Underwood joined NEEDTOBREATHE for their new single “I Wanna Remember.”

#NothingButTheBloodOfJesus is my birthday gift to YOU! Thanks to Bear Rinehart of @NEEDTOBREATHE for harmonizing with me! #MySavior ✨? https://t.co/pmekewvnZG pic.twitter.com/m9RYR7S9rX

Tonight, during the 2021 awards ceremony from CMT, Carrie Underwood was nominated for two categories: Video of the Year and Collaborative Video of the Year. Both were attached to her work with John Legend on “Hallelujah” which was released on her holiday album in late 2020.

Before winning the night’s biggest award, Video of the Year with John Legend, Carrie Underwood and NEEDTOBREATHE took the stage for a live performance of  “I Wanna Remember,” a song that will appear on the group’s upcoming album Into the Mystery that is scheduled to be released July 30th.

“‘I Wanna Remember’ is a nostalgic track and takes you back to the moments you never want to forget. We all came from small towns, and those roots have cemented into the fabric of the band and our music,” Needtobreathe said in a news release. “We felt like [Underwood’s] small town roots and humble beginnings were the perfect addition to this song.”

Watch Carrie Underwood and NEEDTOBREATH sing “I Wanna Remember” for the CMT Music Awards in the video below.