By Jennifer Pernicano on May 10, 2018
Advertisement 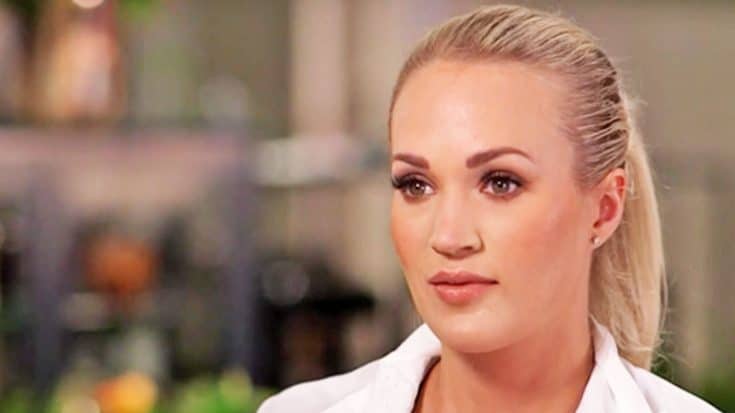 For the first time in six months, Carrie Underwood gave a televised interview.

For just any celebrity that probably would be normal, but not for this country superstar. The reason Underwood strategically stayed out of the spotlight for the past six months was because of a nasty fall she took back in November. The fall happened outside her home in Nashville and left her with a broken wrist and 40+ stitches on her face.

As for how she fell, Underwood is finally telling all to TODAY’s Hoda Kotb.

“Plain and simple, it was just kind of a freak accident,” Underwood told Kotb. “I just fell. I just tripped taking my dogs out to do their business. It could happen to anybody. I say if I would have fallen anywhere else, it wouldn’t have been a problem. There was one little step that I went to catch myself on and I missed.”

Even though she suffered facial lacerations that needed many stitches to fix, Kotb told the “Cry Pretty” singer, “I feel like you look the same.”

“Thank you! I have a dedicated team who can spackle, and paint and paste,” she joked. “But thank you. Every day I feel a little more back to normal.”

When talking about the initial shock of the accident and her injuries, Underwood recalls, “In the beginning, I didn’t know how things were going to end up. It just wasn’t pretty.”

It took Underwood some time to feel comfortable with her injuries and to be in front of a camera again, her first public appearance being the ACM Awards on April 15, where she performed her brand new single “Cry Pretty” and received a 29-second standing ovation.

To us, she may look just as beautiful as she did before, but we can’t imagine what she’s gone through the last six months to get her confidence back. Don’t worry, she won’t be going back into  hiding – we will be seeing a lot of her in the near future. Along with her single “Cry Pretty,” she will be releasing an album of the same name in September.