By Miranda Raye on April 12, 2022
Advertisement 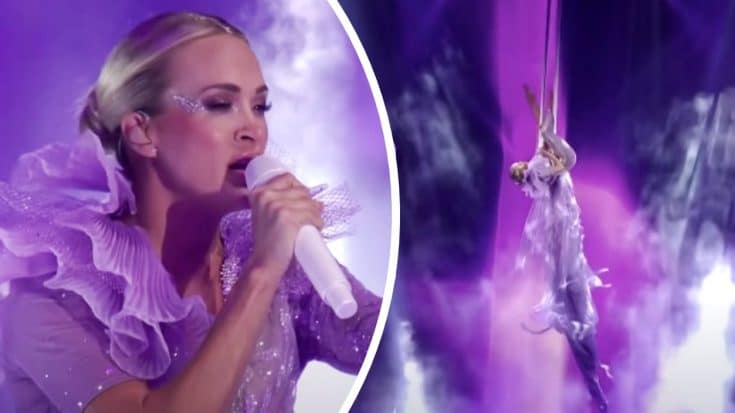 Carrie Underwood released her new single, “Ghost Story” on March 18. The song has Underwood singing to a former lover, saying how her memory will continue to haunt him forever.

Underwood delivered her first live performance of the song at the 2022 Grammy Awards on April 3.

Just a little over a week later, Underwood delivered another performance of “Ghost Story” during the 2022 CMT Music Awards. The annual fan-voted awards ceremony was held on Monday night (April 11).

Underwood has been a staple performer at the CMT Music Awards over the years. She is also the most-awarded artist in the show’s history, with a total of 25 wins to her name (she took home two trophies on Monday night). To top it off, she holds the record for the most wins in the Video of the Year Category.

Once again, Underwood won Video of the Year at the 2022 ceremony. Her and Jason Aldean‘s music video for their duet, “If I Didn’t Love You,” one of three finalists in the category. It also won the Collaborative Video of the Year award.

But before Underwood and Aldean were revealed as the Video of the Year winners, Underwood took to the stage to sing “Ghost Story.”

In the leadup to the ceremony, Underwood was teasing the fact that this performance would be unlike any other she’s ever done. She wasn’t kidding!

Underwood’s performance was pretaped at Resorts World Las Vegas, the home of her Reflection residency.

Vegas performances are known for being elaborate, and Underwood’s performance was no exception. She started off by singing on a raised platform in the middle of the stage as a group of acrobats performed around her while using aerial silks.

Then, in a stunning moment, Underwood joined the acrobats in her own set of silks. She delivered the end of the song while suspended in midair!

Check out the video below to watch Underwood’s soaring performance of “Ghost Story” at the 2022 CMT Music Awards. You can always count out her to deliver a standout performance!