By Miranda Raye on April 16, 2020
Advertisement 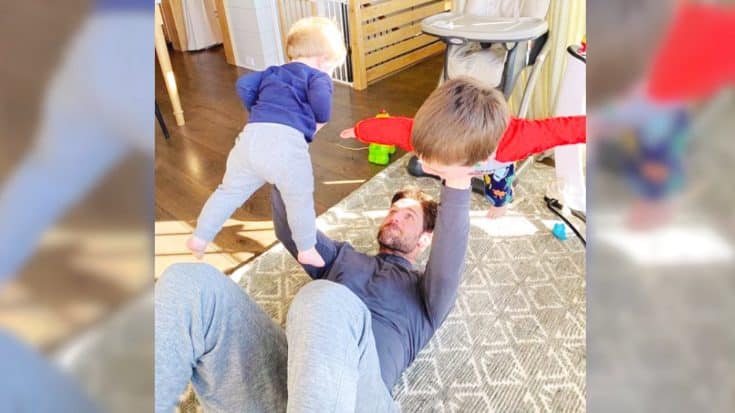 Carrie Underwood and Mike Fisher don’t often post photos of their sons on social media. Even when they do, the pictures often hide Isaiah and Jacob’s faces.

Still, fans gush over all photos Carrie and Mike are willing to share of their sons. Whether you can see their faces or not, any picture of the Fisher boys is an adorable one.

I feel like this picture pretty much sums up fatherhood! ? To all the frog catching, bedtime story reading, wrestling, diaper changing, outside playing, adventure seeking, tickling, cuddling, loving dads out there, Happy Father’s Day! @mfisher1212 your boys sure do love you and are are so lucky to have you! ❤️

Happy birthday, Jacob! How are you already 1 year old? You are smiley, crazy, smart, soooo fast and into everything! And, apparently, you love cake! I can’t wait to see your personality continue to shine! I have a good feeling you’re going to keep us all on our toes for years to come! I thank God for you each and every day. You are truly our miracle baby!!! Mommy loves you! Swipe to see how cute the cake was before Jake got ahold of it! ?

To celebrate Isaiah’s fifth birthday in February, Carrie and Mike hosted a party at an indoor trampoline park. It seems that Isaiah had a blast at his birthday gathering, and Mike joined in on the fun.

Carrie posted a picture that shows Mike playing with Isaiah on one of the trampolines. Both father and son seemed to be having a blast, and were sporting huge smiles on their faces. You can see that picture by scrolling through the below slideshow.

Just wanted to thank @iveycakestore and @defynashville for making Isaiah’s birthday celebration extra special! The cake was beyond amazing and all the kiddos left full and tired out! Tonight, when Isaiah was saying his prayers he thanked God for all of his friends and for the wonderful day he had…that made it all worth it! ? #NinjaTurtleParty with a #ScoobyDooCake #Hes5 #IveyCake #Yum

Anyone who follows Carrie and Mike knows that the retired NHL star is a hands-on dad. This is something we’ve seen in many photos Carrie and Mike have shared, including one Carrie posted on April 16.

The sweet snapshot shows Mike flat on the ground while playing with his sons. He supported each boy with one hand, and pushed them up in the air so they could pretend to fly around like airplanes.

“Mornings at the Fisher house,” Carrie captioned the picture along with some airplane emojis.

That looks like a fun way to spend a morning!

Carrie’s boys mean the world to her. After Isaiah was born, she recorded a song called “What I Never Knew I Always Wanted” which has her singing about her love for her son and husband.

She later released a video montage to accompany the song. The montage contains pictures from the first few months of Isaiah’s life, some of which had never been made public before.

Look back on snapshots from Isaiah’s first few months by watching the video for “What I Never Knew I Always Wanted” below.

Carrie and Mike are such loving parents, and their family is beautiful!