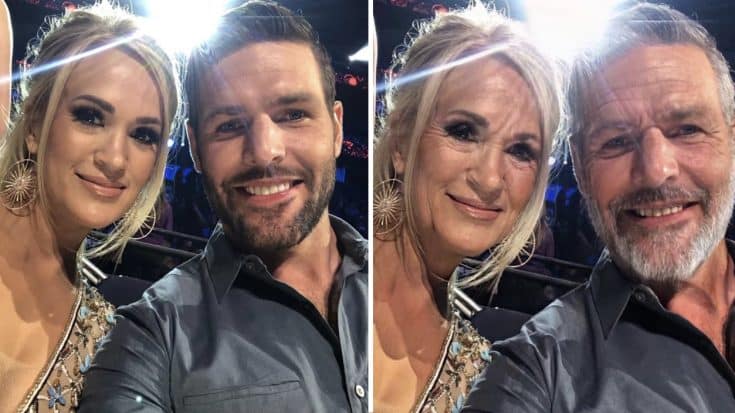 Trends can quickly take hold online, and soon everyone you follow jumps on the bandwagon. 2019 saw its fair share of online trends, with one of the most popular being the “ten year challenge” that took off in January 2019.

Another trend started sweeping social media in July 2019, and it offered some insight into what our friends, family members, and favorite celebrities may look like when they grow old.

There’s an app called FaceApp that takes your photos and can transform your entire appearance. At one point, its most popular feature was the “old” age option, which shows what you may look like with gray hair and wrinkly skin.

Country singers had a blast with the new filter. Some stars were disturbed to see how realistic the transformations look, while others chuckled over the contrast between their current fashionable clothes being worn on a much older body.

Here are just a few examples of some of the many country stars who participated in the trend.

You better believe I’ll still be writing songs when I look like this. Looks like I’ve got some stories to tell. #OldManLB

I plan to still be crimping my hair and wearing cheetah when I’m 85. ?

After seeing all of this catch on, Carrie Underwood knew she had to jump in as well. But instead of just transforming a photo of herself, she used the “old” filter to age a selfie she took with her husband, Mike Fisher.

The original picture was taken at the CMT Music Awards in June 2019, and was shared by Mike on Instagram.

Date night at the cmt’s with this beauty!

Carrie took that same photo and applied the aging filter to it to see what she and Mike will look like when they’re old and gray, and her followers got a kick out of the result.

Here are just a few of our favorite comments that appeared on Carrie’s post:

One person who didn’t read the caption even thought that Carrie was her mother, Carole!

Honestly, older Carrie and Mike don’t look that different when compared to their current selves. We’d say both of them look like they aged well! Check out the photo below.

Isn’t it funny to see what they may look like when they’re older?

It’s clear that Carrie and Mike love spending time together. Mike made an appearance in Carrie’s music video she shared to accompany her summertime single “Southbound.”

You can watch them both have some fun in the sun by tuning in to the video below.