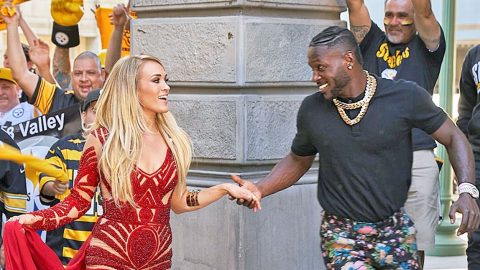 The “Cry Pretty” singer continued on the tradition of singing “Waiting All Day For Sunday Night,” which is a reworking of the Joan Jett song “I Hate Myself For Loving You.” After a few years of performing the Sunday night staple, the song changed to “Oh, Sunday Night,” a song inspired by Underwood’s duet with Miranda Lambert, “Somethin’ Bad.”

Like previous years, the song’s lyrics always changed a bit each week to be about the two teams that were gearing up to play each other that night.

Despite the rave reviews of “Game On,” NBC changed the opening song for the 2019 season due to it being the 100th anniversary of the NFL. And for the centennial celebration every Sunday night, Underwood was joined by legendary singer Joan Jett.

In a press release it was revealed that Underwood will be returning for the 2020-2021 football season as the singer of the Sunday Night Football theme song, which will once again be “Waiting All Day For Sunday Night.” She recorded a new version in Nashville and the video was filmed without extras.

It’s also reported that football players will appear in the opening video via virtual cameos and fans will be included with videos they submitted.

“We are excited about this year’s new collaboration with Carrie, including scenes in the recording studio, and look forward to uniquely incorporating the game’s great fans,” Tripp Dixon, creative director of SNF‘s opening video, said in the press release.