By Manly Bryant on January 29, 2019
Advertisement 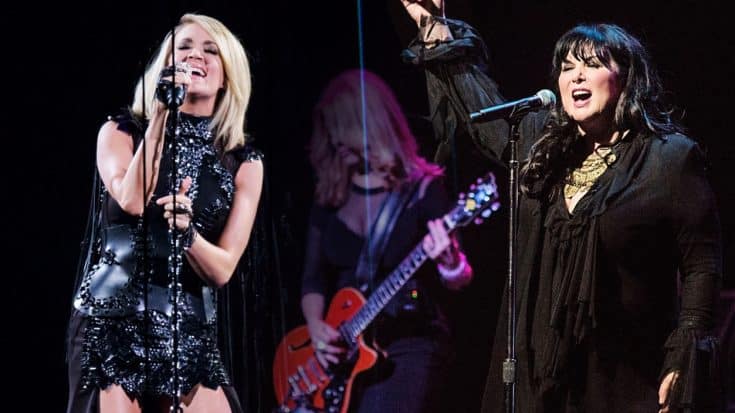 This iconic rock band comprised of the Wilson sisters has done it again – and this time they brought in some of the best country talents for an album you will not want to miss!

For the first time ever, Heart released some of their most-rare recordings and performances on a full-length album that featured none other than Gretchen Wilson and Carrie Underwood.

While Ann and Nancy Wilson have been headlining rock goddesses for decades, in the years since these country queens rose to prominence, they too have issued their own twists on classic rock hits – and apparently Heart loved them so much, they decided to bring them onto this new album.

1983 – Behind the scenes – 'How Can I Refuse' music video shoot #BTS #TBT #HowCanIRefuse pic.twitter.com/o1BqmFVome

Heart is known for their own series of legendary hits like “Barracuda,” “These Dreams,” “Alone,” and “All I Wanna Do Is Make Love to You,” among many others. They rose to prominence in the late 1970s and nearly a decade later, they scored another series of hits.

With more than 15 albums and 64 singles, Heart has built a legacy of music in a way many people only dream of.

With such icons to look up to, both Carrie Underwood and Gretchen Wilson have honored this rock duo with their own performances of some of their biggest hits.

Gretchen has often covered “Barracuda” in her live shows (a fan favorite) and even sat down with Big & Rich’s John Rich for a performance of Heart’s “Straight On” that is truly unforgettable.

“One of the biggest influences on my musical career has been that of Heart…” Gretchen said before her duet with John Rich.

Underwood, who got her start taking home the top prize on American Idol, used a Heart song to help score America’s vote – and she’s continued to sing beloved rock songs while on tour in the 14 years since.

Before the performance, Underwood explained why she was going to sing Heart’s “Alone” on Idol instead of her traditional country tune.

“Throughout this entire competition I’ve kinda been the country singer and I wanted to take a risk and break out of my shell a little bit – so I thought I’d sing an 80s rock song.”

During a 2006 special VH1 event called Decades Rock Live!, Heart gave a full-blown concert that featured a varying number of special guests – including Gretchen Wilson and Carrie Underwood (among others.)

Well, the recordings from this once-in-a-lifetime evening have never been released before, but that all changed on January 25th, 2019.

With the debut of this album, Heart released the entire collection of recordings from that special night on an album titled Live In Atlantic City and even shared an entire playlist of clips from that evening in high-definition!

"Live In Atlantic City" is out now! Here's a little insight into the show!
You can get your own copy of the album here: https://t.co/7vlNsDB8QV pic.twitter.com/j8zz4yCmYH

Carrie Underwood and Gretchen Wilson are featured on the tracklist alongside Dave Navarro, Rufus Wainwright, Alice In Chains, and Duff McKagan.

Heart sang with Wilson on two songs, “Even It Up” and “Rock ‘n’ Roll.” Underwood joined them for her favorite song, “Alone,” and we have videos of both collaborations below!

Watch these killer live videos and let us know what you think about Gretchen Wilson and Carrie Underwood is featured on Heart’s newest album in the comments!