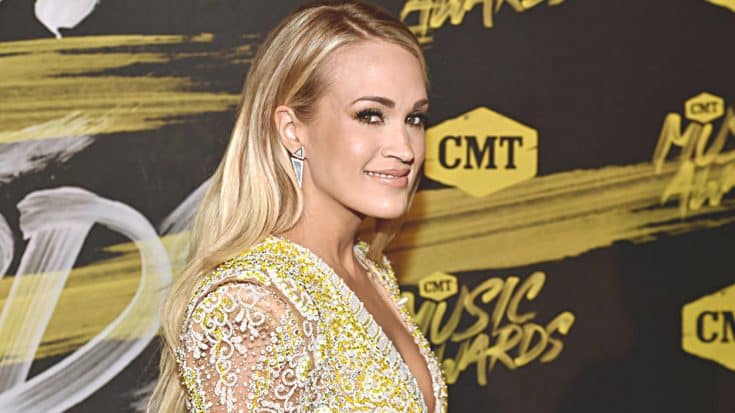 Now that she has fully recovered from her November fall, Carrie Underwood is back and ready to take on the world. She’s been the star of the past two country awards shows, each time delivering a knockout performance of her current single, “Cry Pretty.”

In addition to making the awards show circuit, Underwood had a number of other high-profile performances this year. She sang on American Idol, celebrated her tenth anniversary as a member of the Grand Ole Opry, performed at CMA Fest, and served as the headliner of an inaugural country event.

That event was the Live at the Vineyard Festival in Napa, California, which hosted its first-ever “country edition” in May.

What a great night! Thanks for having me, @liveinthevineyard !?

But the Live at the Vineyard Festival won’t be the only inaugural event that Underwood will headline this year. As announced on Tuesday (June 12), she will be the first-ever headliner of a Spotify’s Hot Country Live show.

As time goes on, Spotify plans to host several concerts that will feature prominent artists from its Hot Country playlist. The Hot Country Live concerts will take place all over the country, with the first one being in the Seaport District of New York.

The inaugural show just so happens to take place on the Fourth of July, making it all the more exciting.

“I’m thrilled to be a part of Spotify’s first ever Hot Country Live show, and can’t wait to celebrate the holiday playing live music under the stars,” Underwood said in a press release.

In addition to Underwood, popular country duo Dan + Shay will also be opening the event. Other performers will be announced in the weeks to come.

We feel like Spotify picked a fitting artist to kick off its first-ever Hot Country Live concert. Underwood’s career is on fire right now, thanks in huge part to her powerful single “Cry Pretty.” Watch her new music video for the song below.

What do y’all think of this news? Do you want to go see the show? Or if you can’t make it, which city do you hope hosts the next Hot Country Live concert?