By Miranda Raye on September 10, 2021
Advertisement 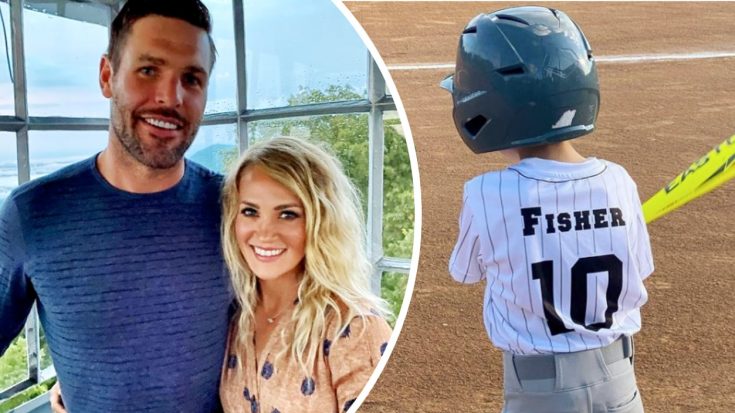 Ever since her eldest son, Isaiah, was young, Carrie Underwood has been asked what she thinks he’ll do when he grows up. Will he become a singer, like her? Or will he follow in his father Mike Fisher‘s footsteps and become an athlete?

“I honestly think there’s a little bit of both of us in there,” Carrie told The Insider in 2016. “He’s a little ham. He loves to be in front of the camera…he’s really a physical baby too, so we’ll see!”

During an appearance on The Tonight Show in 2018, Carrie confessed she’d love it if Isaiah became a singer. But she said she’d never push him to pursue a singing career if he wanted to do something different.

“If he’s not musically inclined, that is fine. I’m excited to find out what he’s good at, what he’s passionate about and I will support that, but I really want him to sing,” she said.

Fans got their first real chance to hear Isaiah sing when he recorded “The Little Drummer Boy” with Carrie for her 2020 Christmas album, My Gift. It was obvious he loved performing!

Isaiah also enjoys sports like his father Mike (who is a retired NHL player). Recently, Isaiah made his debut as an athlete…though he didn’t play hockey.

Carrie shared a couple of adorable photos that show Isaiah playing at his first-ever baseball game.

“Isaiah made his baseball debut tonight!” Carrie captioned the photos.”I got more nervous watching him than I used to get when I watched his daddy play hockey!” She also included the hashtags “#ProudMom” and “#KidCanHit.”

The last slide in the slideshow is a short clip of Isaiah hitting the ball and running to first base. It was too cute when he reached the base and did a little hop in celebration!

Look below to see the post Carrie shared about Isaiah’s first baseball game, and keep flipping through the slides to see that video. Way to go Isaiah!