Carrie Underwood Sings “Mary, Did You Know?” As Guest On “The Kelly Clarkson Show”

By Miranda Raye on December 21, 2020
Advertisement 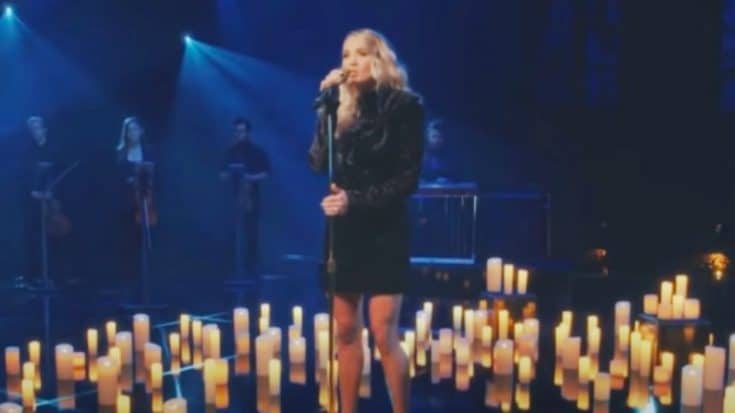 In September, Carrie Underwood released her first full-length Christmas album. Titled My Gift, the album contains a mix of originals and covers.

Some of the original songs that appear on the record are “Let There Be Peace” and “Sweet Baby Jesus,” which were both co-written by Underwood. Another original song is titled “Hallelujah,” and is a duet with Voice coach John Legend.

The duo released a music video for the song, which already has over four million views.

Among these original tunes, Underwood included her renditions of many Christmas staples. She covered traditional songs such as “Joyful, Joyful We Adore Thee,” “O Holy Night,” and “Away in a Manger.” She even had her five-year-old son, Isaiah, join her on a recording of “The Little Drummer Boy.”

Mark Lowry wrote the lyrics of “Mary, Did You Know?” in 1984 and Buddy Greene wrote its accompanying music in 1991. The song was first recorded by Christian artist Michael English.

Since then, “Mary, Did You Know?” has been covered by a number of notable artists, including The Voice‘s Jordan Smith, a cappella group and Sing-Off winners Pentatonix, and by Kenny Rogers and Wynonna Judd in a duet.

Underwood shared her stunning rendition of “Mary, Did You Know?” when she was a guest on Kelly Clarkson‘s talk show The Kelly Clarkson Show. She didn’t travel to the set for her performance, so she delivered it virtually instead.

Surrounded by a bunch of twinkling candles, Underwood delivered her performance with control and clarity. We’ve heard so many versions of this song before, and hers is definitely one of the standouts.

Tune in to the video below to hear Underwood sing “Mary, Did You Know?” as a guest on The Kelly Clarkson Show. It’s a performance that is sure to give you goosebumps.