By Miranda Raye on November 25, 2019
Advertisement 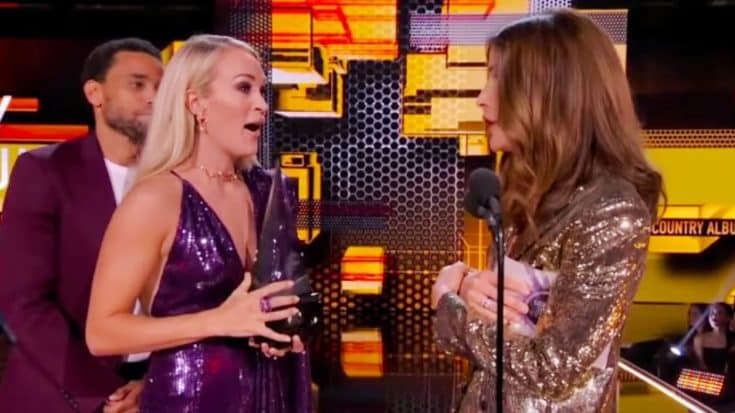 On Sunday (November 24), music’s brightest stars celebrated the greatest and most popular music of 2019 at the American Music Awards. The AMAs are fan-voted, and honor artists of all genres, so many country stars were in attendance.

One of country music’s biggest winners at the 2019 AMAs was Carrie Underwood, who walked home with two trophies from the ceremony.

Tonight was a dream! Thank you, fans, for voting…and for the love and support that you CONSTANTLY give! @amas I also want to say what an honor it was to be nominated with @kelseaballerini @marenmorris @danandshay and @kanebrown_music ! You guys are the best! Annnnnnd @shaniatwain is the Queen!!! ❤️❤️❤️ #AMAs

The “Drinking Alone” singer also thanked her fans in her acceptance speech during the ceremony.

Initially, Underwood was only made aware that she won the award for Favorite Country Album. But before she started speaking, presenter Colbie Smulders interrupted her and told her they had a surprise in store.

That’s when Smulders shared the news that Underwood had also won the award for Favorite Female Artist-Country. Underwood was relieved, because she was initially worried that Smulders was interrupting her for a negative reason!

She then recognized her husband, Mike Fisher, and their two sons, Isaiah and Jacob. Speaking about how they all traveled together on her Cry Pretty Tour 360, Underwood said, “It was hard, but it was amazing, and you guys are my whole world. So I love you so much. Mommy loves you!”

Underwood then went to thank her manager Ann Edelblute, who was in the audience. When she noticed that Edelblute was getting teary-eyed, Underwood began to choke up as well, saying, “I’m gonna cry now.”

She remained emotional as she went on to thank the fans for voting and for always supporting their favorite artists.

You’ll likely be left wiping away tears from your own eyes as you watch her entire AMA acceptance speech in the video below. Congratulations to Underwood on her two AMA wins this year!