By Manly Bryant on August 2, 2018
Advertisement 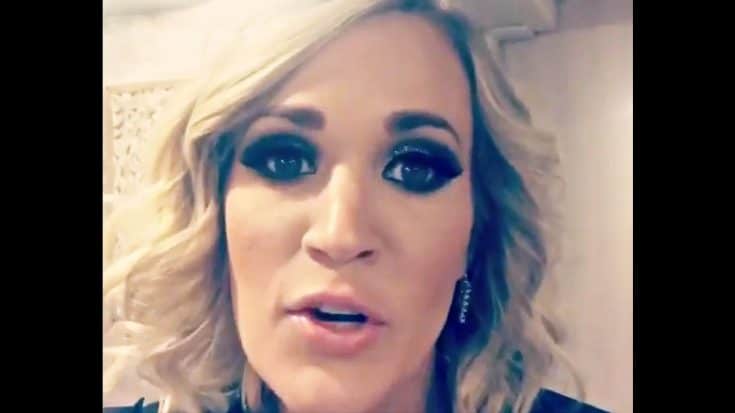 Months after her terrible fall that scarred her face, the country superstar had been dodging the tabloid media and rumor mills as they made suggestions that she underwent a series of plastic surgery procedures…

Carrie Underwood is no stranger to the out-of-hand media outlets that often come up with wild theories about her life…but this one hits a little closer to home.

Together, we’re in it to end it! Help us shine a light on modern day slavery. @enditmovement #enditmovement

Left with scars on her face after cutting it open during a nasty fall that required upwards of 50 stitches, Underwood says she’s been very lucky during the healing process.

While she had explained that she “might look a little different” to her fans, the country music star hadn’t been seen in face-to-face interviews following the nasty fall…until this interview.

Sitting down with famous country music radio host, Bobby Bones, Underwood discussed her life, family, and career – and Bones didn’t shy away from asking about her accident just before the holidays.

In a tweet to fans, she stated that she had just broken a wrist…and later explained she had about 50 stitches in her face.

As the rumor mill began to churn, various outlets and talk show hosts started to speculate it was a giant ruse to cover up the fact she was electing to have plastic surgery – and now…she’s addressing her “plastic surgery” head-on.

“If I had fallen anywhere else I would be perfectly fine, but it was one step that messed everything up,” she added. “I thought I just busted my lip when I walked outside. I went to go survey the damage and was like, ‘Oh no!’”

Getting ready for the #CMTAwards ! Step 1: try to fake a good night’s sleep with coffee and eye masks. I’ll let you know how it works out! ???

In an interview with Redbook Magazine, Underwood spoke out about having plastic surgery (as told by tabloids) and actually confessed to wanting some.

“There were so many rumors online — that you’d had plastic surgery, that it was a publicity stunt. Did that bother you?” the magazine asked her.

“I’m on some magazine every other week for something crazy,” Underwood began, acknowledging she’d seen some of the plastic surgery rumors. “It’s a little sad, because the truth is just as interesting… I wish I’d gotten some awesome plastic surgery to make this [scar] look better.”

What kind of plastic surgery would she have wanted to get done? Honestly, we couldn’t tell that she even had a scar, so things seem to have shaped up well for one of country music’s most popular performers.

Underwood did admit that her mom was a bit worried about it and had brought it up before to her, but she took it in stride.

“But I try not to worry too much about it. My mom will be like, ‘Did you see they are saying this about you?’ And I’ll be like, ‘Mama, I don’t care. I’m just trying to raise my son and live my life’.”

What do you think about Carrie Underwood’s confession to wanting plastic surgery to fix her scar? Watch the video below and share your opinion with us.