Carrie Underwood Talks Recording “The Little Drummer Boy” With Son: “He Sang It With His Whole Heart”

By Miranda Raye on November 3, 2020
Advertisement 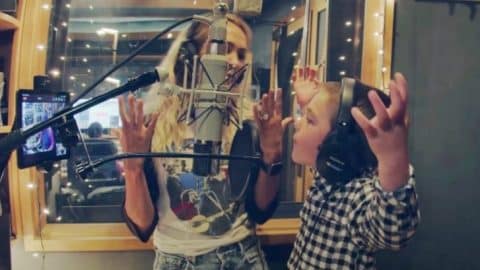 On September 25, 2020, Carrie Underwood released her first full-length Christmas album. Titled My Gift, the album features a mix of classic holiday tunes and a few originals.

One song Carrie made sure to include on the album was “The Little Drummer Boy.” The beloved tune actually inspired the name of the album, as Carrie explained in a video:

“…the sentiment behind it is just so honest,” Carrie said of the song. “There’s a little boy…they’re bringing gifts to baby Jesus. He doesn’t have anything, he’s poor, so he says, ‘I know, I’m gonna play my drum for him. That’s what I have.’ And to me, that’s a gift that was given to him by God, his love of music.”

The song also makes Carrie think of her oldest son, Isaiah. Because of this, she invited Isaiah to record “The Little Drummer Boy” with her for My Gift.

Carrie previously spoke to TODAY about what it was like to record the holiday tune with her then-five-year-old son. She said he was an “expressive” singer and he was “totally” able to tap into his emotions as he sang:

“When I heard the song back, with his sweet little voice on it, I was laughing and crying and just so many emotions,” she said in that interview.

Carrie reiterated those feelings when she more recently appeared in an episode of of PEOPLE (the TV show!).

“When I first heard it back I was laughing and crying at the same time because it was just this beautiful, pure moment from him,” Carrie said.

She went on to further compliment her son’s performance, saying, “He did such a great job. He remembered the lyrics and he sang it with his whole heart.“

When you listen to Carrie and Isaiah’s recording of “The Little Drummer Boy” below, you’ll definitely be able to hear his enthusiasm. Who knows, maybe he’ll grow up to be a singer like his mama!