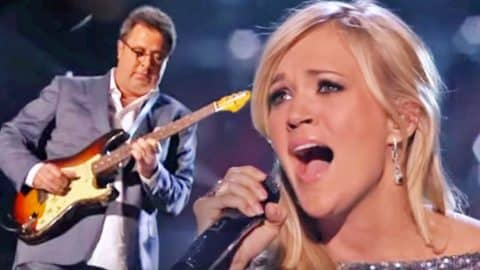 Carrie Underwood and Vince Gill have teamed up for performances several times before, and whenever they do the result is nothing short of amazing.

But it was their 2011 performance of the classic hymn, “How Great Thou Art” that still has people talking, even years later.

Gill and Underwood took the stage for the ACM’s Girls’ Night Out: Superstar Women of Country special. Before they started singing, Underwood recognized all of her fellow female artists, and thanked Gill for performing with her.

“Thank you so much for sharing this very special night with me, it means a lot,” Underwood said.

What happened next was definitely a special moment.

Prepare To Have Your Breath Taken Away…

Underwood started off singing softly on her own, while Gill played guitar beside her. As the song continued, the notes grew higher and Underwood’s voice grew louder, before Gill joined in and sang powerfully in harmony.

In the middle of the song, Gill gave Underwood a chance to rest while he played a moving guitar solo. Once Underwood caught her breath, she jumped back in, and sang each note with an intense level of passion.

Before the song was even over, the entire crowd was on their feet cheering and clapping, and many had tears in their eyes.

We weren’t able to get through this inspiring performance without tearing up ourselves, and we’re sure you won’t be able to either. You can watch it below.

What a beautiful rendition of this beloved hymn!