By Miranda Raye on August 17, 2021
Advertisement 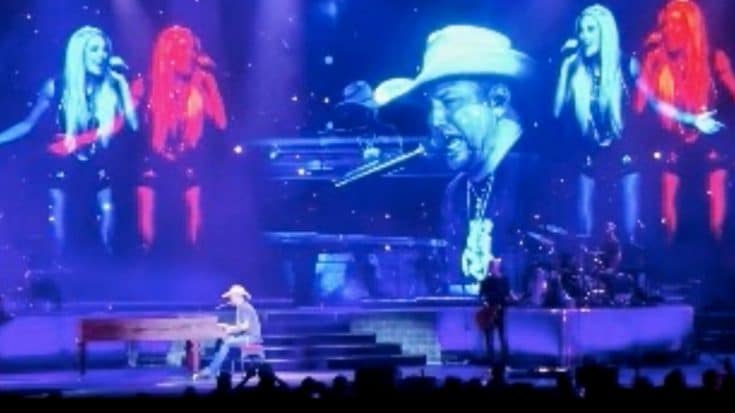 In July 2021, Jason Aldean released a new duet with Carrie Underwood. Titled “If I Didn’t Love You,” the song has Aldean and Underwood singing about heartache and loneliness.

“If I Didn’t Love You” soon made country music history. The song debuted at the second position on the Hot Country Songs chart, breaking the record for the highest debuting duet between a male and female artist.

Aldean and Underwood also released a lyric video to accompany the song. The video, which contains footage of the two singers performing their duet in the studio, generated millions of views. An official music video was released in September 2021, and is also has millions of views.

The song later became a #1 hit and went on to win an ACM Award!

Even though “If I Didn’t Love You” was a huge hit from the start, Aldean and Underwood didn’t sing it together live until the CMA Awards in November 2021. But Aldean had a creative way of making sure Underwood was part of the song when he sang it at a concert in August 2021.

During this concert, Aldean sat down at a piano on stage and began singing “If I Didn’t Love You.” As he did so, fans were surely curious to see how he’d involve Underwood in the performance.

They soon got their answer when Underwood made an appearance via video! She filmed footage of herself singing her parts in “If I Didn’t Love You,” and Aldean played that video while he sang.

In doing so, Aldean managed to create a virtual duet between him and Underwood. It was quite the sight to see!

Tune in below to see a fan-filmed clip of Aldean’s duet with the video version of Underwood.