By Jennifer Pernicano on August 21, 2018
Advertisement 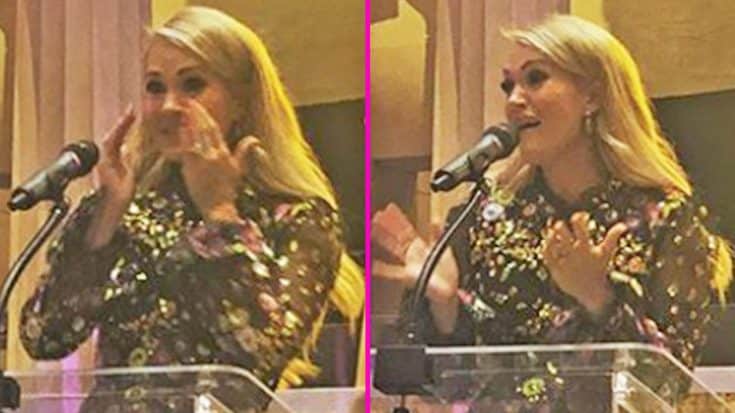 Held at The Parthenon in Nashville, Tennessee, Underwood’s listening party was “fit for a queen,” according to photos from local radio show Ty, Kelly, and Chuck. Sticking with her metallic and pink theme, the decorations were gorgeous balloons, which accompanied the event space’s gorgeous gold Greek statuettes.

Venue fit for a queen! @carrieunderwood is giving us and some of our industry friends a preview of her #CryPretty album tonight. ✨? pic.twitter.com/QlpbCDZdNy

A few hours before her listening party, she gave the public an inside look into her upcoming album, releasing the titles of each of the twelve tracks, which include the single, “Cry Pretty,” plus a bonus track – her duet with Ludacris, “The Champion.”

Can’t wait to share these songs with you on September 14th!!! #CryPretty ? pic.twitter.com/tOgkYacPTS

While introducing the album, Underwood told everyone in attendance that she poured everything she had into writing and recording the album and according to the passes she handed out, she co-wrote nine out of the twelve songs.

Hunter Kelly caught the exact moment Underwood broke down in tears. You can see those photos by swiping through his Instagram post below.

An emotional @carrieunderwood introduces the music at the #crypretty listening party in Nashville. She said it’s been an emotional journey!

Her husband Mike Fisher was there to support her, and even took photos of the night on his iPhone! In this fan-snapped photo you can see him proudly looking on, and you can spot a little baby bump on Underwood!

The two recently announced they are welcoming their second child, which is why her tour won’t start until May 1.

We wish we were at this listening party, but we guess we will have to wait until September 14 to hear the work of art in full. For now, watch her perform her single “Cry Pretty” in the video below.