By Miranda Raye on November 15, 2019
Advertisement 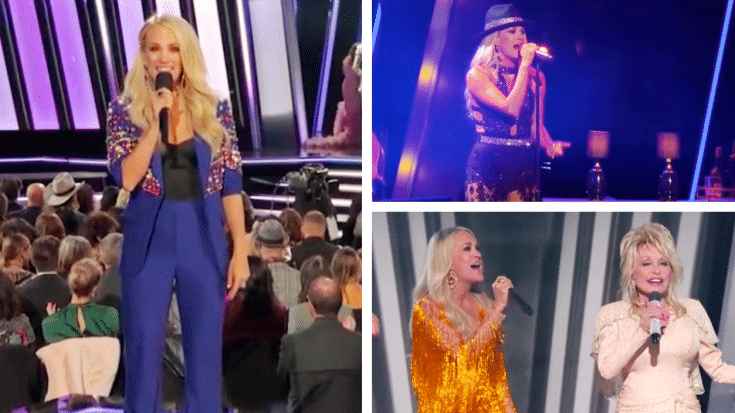 After hosting the CMA Awards for 12 years, Carrie Underwood has perfected the quick change. In the past, she and former co-host Brad Paisley made jokes about how many times she changed her clothes throughout the awards ceremony.

Underwood, McEntire, and Parton poked fun at their hectic dressing room situation in their opening monologue, saying they had “racks of clothes and dresses everywhere” backstage.

While McEntire and Parton changed clothes many times throughout the night, we think Underwood had them beat. On Thursday (November 15) she shared a collage on Instagram that shows all of the outfits she wore throughout the CMA Awards…ten total!

From her sheer and gold red carpet dress, to the black jumpsuit she wore when she sang “Drinking Alone,” Underwood was always dressed to the nines for this year’s awards ceremony. Her collage also contains a tenth outfit many fans may not have seen, as it appears to be something she wore after the broadcast ended.

In the caption to her collage, Underwood gave credit to all of the designers and people who helped her with her wardrobe at the CMA Awards this year.

Which one of Underwood’s looks was your favorite?

We’re big fans of the gold, fringe-covered dress she wore for the number honoring female artists in country music. She opened that performance with her two guest co-hosts, and together they sang “Those Memories of You,” which was recorded by Parton, Emmylou Harris, and Linda Ronstadt.

You can relive the splendor of that performance below. Underwood and all of the other ladies looked and sounded amazing!