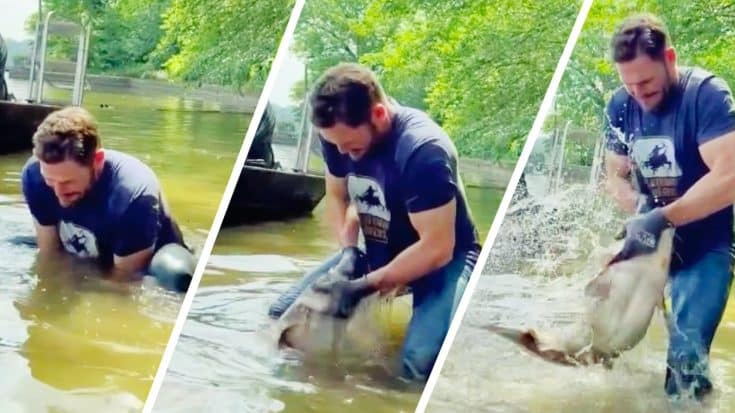 Carrie Underwood‘s husband Mike Fisher is an avid outdoorsman. He even has his own line of hunting apparel called Catchin’ Deers.

With the last name “Fisher,” it only seems fitting that Mike also enjoys fishing. He and Carrie went fly fishing in August 2020, which Mike says is “one thing [they] love to do together.”

Mike enjoys fly fishing even though Carrie happens to catch bigger fish than him!

But Mike eventually got the chance to catch a big fish of his own!

On Saturday (June 12), Mike posted a video of himself “noodling” for catfish. Noodling is favorite Southern pastime that involves fishing for catfish with your bare hands. You basically use your hand as the hook!

Catfish can be quite large, so it takes a lot of strength to be able to yank one out of the water while noodling.

Mike managed to catch a pretty massive catfish on his noodling adventure. Even though he’s an athlete, you can tell it was still a challenge for him to lift the catfish into the air.

“Hard to beat fresh catfish!!” Mike captioned the video, which you can watch below.

Have you ever gone noodling before? Let us know if so!