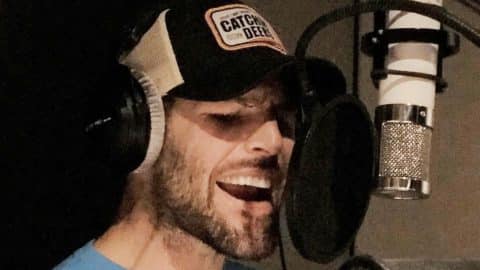 One of the sassiest and well-known Carrie Underwood songs got a new remake and not in the way you’d expect. Husband to the country music singer, Mike Fisher, gave fans quite the laugh when he released his parody of his wife’s famous tune. Fisher took his wife’s famous 2005 hit “Before He Cheats” and changed the lyrics to fit his own hunting storyline instead; titled “Before She Bleats.” This once fierce break-up song got a comical twist you might have never seen coming…

Hinting at new music back in October, Carrie’s hubby posted an Instagram of him recording a song in a studio, sending fans into a frenzy. Deciding to dip his toes into the country music world, Fisher released a song in support of the hunting lifestyle apparel company, Catchin’ Deers.

I know you guys have been waiting a long time but new music is on the way!! Stay tuned!

With the original song being about catching a cheater, Fisher’s version focuses on catching prey. The song describes a hunter tracking down his deer and managing to get a shot after he hears a bleat.

“Well there he was right on her trail, so I settled on a shoulder and I let her sail. Maybe next time she’ll think before she bleats.”

Two days before Fisher’s big release, Catchin’ Deers posted a teaser on their Instagram that got hunters’ attention everywhere. It starts off with Fisher driving in his pick-up truck and switching on the radio to hear the tune of “Before He Cheats.” From there you see him slowly walking through a field running his fingers through the weeds.

In his red and black checkered flannel and Catchin’ Deers hat, Fisher begins singing his own version to the song. The video takes place in a series of different locations including his pick-up truck, an open field, and a recording studio. Although Fisher might not carry the same golden vocals as his wife… his dramatic acting skills were very much on point. From the hysterical lyrics to the creative storyline, you won’t be able to stop laughing at this new version of a country favorite.

Watch the incredibly hilarious “Before She Bleats” full video below!

Before She Bleats: Official Music Video