By Jennifer Pernicano on February 26, 2019
Advertisement 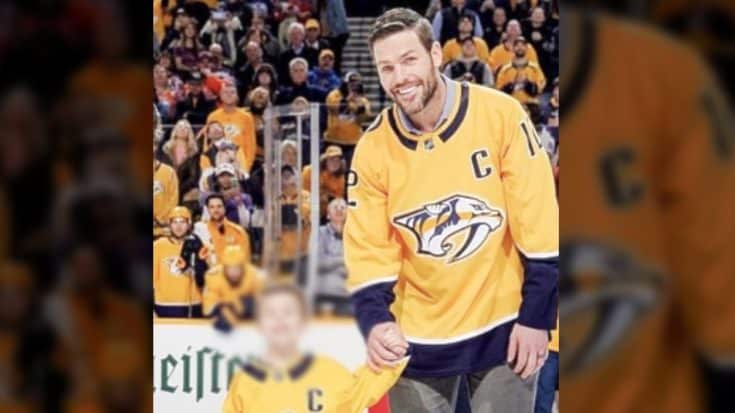 In the last few years, Mike Fisher has given his wife Carrie Underwood a run for her money on who is the more beloved celebrity in Music City. Underwood, as we all know, is a powerhouse award-winning country music star, while Fisher is the retired captain of the Nashville Predators.

Date night with my better half!!

They are parents to two boys, Isaiah who will be four years old any day now, and newborn Jacob.

At the end of Fisher’s career, Isaiah was able to attend a few games and it resulted in some of the sweetest father-son moments we have ever seen. At an April 2018 game, Isaiah cheered on his dad and Underwood posted some of the awesome moments captured that night, including a snap of Fisher handing his son a hockey puck before the game started.

Because Isaiah is clearly his dad’s biggest fan, Fisher made sure to bring him when he was invited to do the ceremonial first puck before the Predators’ game on Monday (Feb 25) against the Edmonton Oilers at Nashville’s Bridgestone Arena.

The father-son duo walked hand-in-hand to center ice wearing matching jerseys while Isaiah held the puck tightly in his hand. Before making their way to center ice, Fisher was given a gift from the Nashville Predators Hockey Ops Staff.

Fisher, Isaiah, Predators’ captain Scott Harnell, and Oilers Asst. Captain Milan Lucic all posed for a photo before the first puck, and Isaiah made sure everyone could see his big smile. You can almost hear him saying, “Cheeeeeeeese!”

Thank you preds fans and @predsnhl for an unforgettable night! Izzy and I had a blast! #preds #hattrickpuckdrop #cheese

After the photo op, young Fisher made two attempts to drop the puck in front of the two hockey players, and once he did it correctly, he was so excited! The little guy started jumping around and when it was time to exit the ice, he ran off ahead of his dad, who fist-bumped or high-fived each of the Predators players.

The commentators had nothing but nice things to say about the retired hockey pro, expressing how much Nashville loves him. Watch Isaiah’s puck drop in the video below!