By Miranda Raye on November 1, 2019
Advertisement 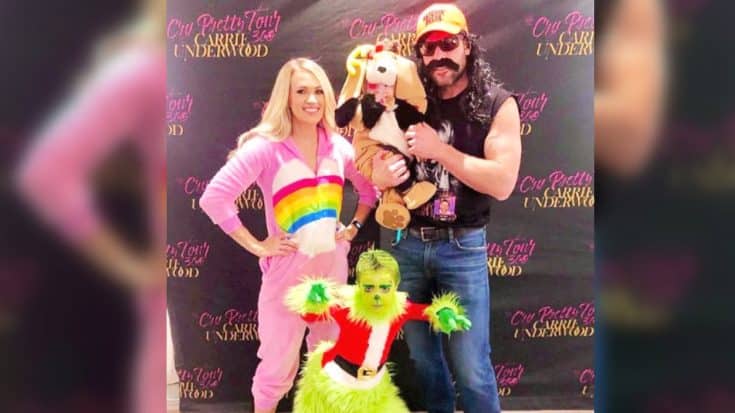 Carrie Underwood loves Halloween, so it seems fitting that the final night of her Cry Pretty Tour fell on October 31 in 2019.

Although Carrie didn’t sport a costume on stage during her concert at Detroit’s Little Caesars Arena, she did dress up backstage before the show. She dressed as Cheer Bear from the Care Bears cartoons, which was the perfect costume choice, since her fans are known as “Care Bears.”

Her Cheer Beer onesie looked cute and cozy…perfect for the chilly Michigan weather!

Carrie wasn’t the only one in the Halloween spirit. Her entire family joined in on the fun!

The “Drinking Alone” singer shared a look at her then-four-year-old son Isaiah’s costume on her Instagram Story. He dressed as The Grinch from the Dr. Seuss book/movie, How the Grinch Stole Christmas.

Carrie helped Isaiah with his costume by doing his makeup for him. “My Grinch,” she wrote on top of a photo that showed Isaiah in the makeup chair.

Later, Carrie shared a photo that showcased her whole family’s Halloween attire. It turns out that Isaiah’s Grinch costume coordinated with the one worn by his then-nine-month-old baby brother, Jacob.

Jacob wore an adorable outfit that made him look like the Grinch’s trusty dog, Max. He even had the single antler on top of his head like Max did!

As for Carrie’s husband, Mike Fisher, he dressed as “Buck Daniels,” and wore a cutoff Cry Pretty shirt along with a hat from his Catchin’ Deers appeal line.

“Hope everyone had a good #Halloween ! Lots of love from Cheer Bear, The Grinch, Max and Buck Daniels…” Carrie wrote alongside a photo showcasing her family’s Halloween attire.

Hope everyone had a good #Halloween ! Lots of love from Cheer Bear, The Grinch, Max and Buck Daniels…

Her fans loved the cute family photo. While they enjoyed seeing everyone’s costumes, many people commented that Isaiah stole the show. It sure looks like he was having a fun time dressed as the Grinch!

Even though Carrie didn’t wear her costume on stage, she still kept fans on their toes when it came to her attire. She changed outfits many times throughout the show, with one standout piece being the bright pink dress she wore for the encore. Watch her sing “Cry Pretty” during that part of her Detroit concert below.