By Manly Bryant on July 6, 2021
Advertisement 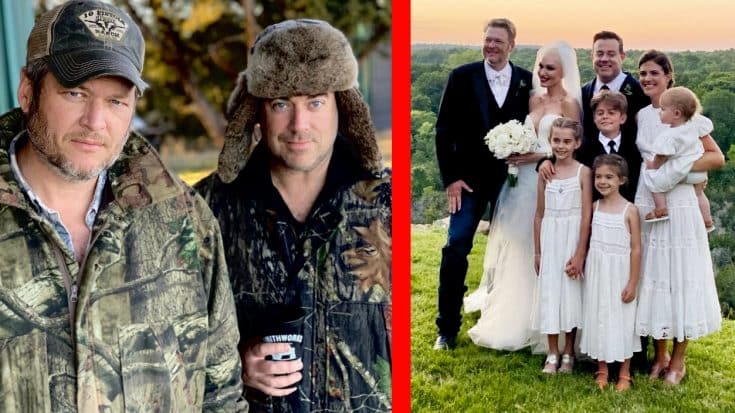 Hitched in a private ceremony over the weekend, country superstar Blake Shelton and Gwen Stefani welcomed some of their closest friends to celebrate – including Carson Daly.

All three have had notable roles on NBC’s hit singing competition The Voice and that’s actually where Blake and Gwen first fell in love!

The three have become quite close friends over the years and often share their adventures together on social media. So, it was only natural to pick Daly as the officiant for his best friends’ wedding!

In a new interview with the Today show, Daly opened up about the amazing time he had this weekend celebrating the union of two people he cares so much about.

“They’re an unlikely pair. They’re like if you paired delicious fried chicken with champagne,” he explained in jest. “On paper, on the menu, it doesn’t work, but it does work.”

He also explained that he had convinced Blake and Gwen to write their own vows – especially considering what talented songwriters they are. Both agreed…but, when the time came to say his –  Blake ended up taking it to the next level.

Instead of just reading off what he had written down, Blake brought out a guitar and delivered a brand new original song – all to honor Gwen.

“He sings her a song while he was crying, one that he wrote just for her… not a dry eye in the house…It was a bunch of pinch-me moments.”

Following this, Daly publicly called on his friend to release the song publicly and said the working title of the piece was “Reach the Stars.”

He said that it would help listeners experience the immense “joy and beauty” that he had felt during that special day.

“You have to [record it] now, and I get the royalties if you do,” Daly laughed.