By Miranda Raye on December 16, 2020
Advertisement 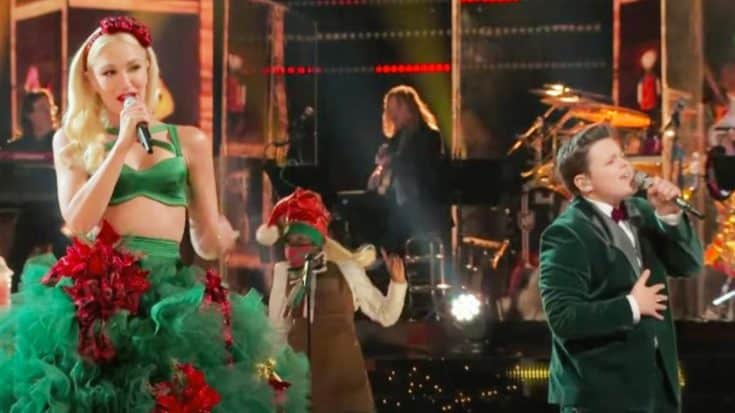 During the Season 19 finale of The Voice, all five finalists got the chance to sing a duet with their coach.

Since the finale aired the week before Christmas, there was a lot of emphasis placed on holiday cheer. The results show opened with a clip of the Top 20 contestants coming together to sing Brenda Lee‘s “Rockin’ Around the Christmas Tree.”

This festiveness spread over into the coach and contestant collaborations. 15-year-old Carter Rubin joined his coach Gwen Stefani to sing a popular Christmas duet…which just so happens to be her own song!

The song they performed was “You Make It Feel Like Christmas,” which Stefani released in 2017. The song features her now-fiancé and fellow Voice coach Blake Shelton.

“You Make It Feel Like Christmas” reached the ninth spot on the Adult Contemporary chart and peaked at the 37th spot on the Holiday 100 chart. Stefani and Shelton released an accompanying music video in 2018, which has since generated over 13 million views.

Rubin took Shelton’s place and sang all of his parts in the song when he collaborated with Stefani on the Voice finale. He was the one who opened the performance before being joined onstage by his coach, who wore a poofy green dress resembling a Christmas tree.

The duo’s holiday duet could be summed up in one word…”delightful.” You could tell they were having a ton of fun singing together, even though they were surely nervous to find out the show’s results later that night.

Celebrate Rubin’s win by watching him sing “You Make It Feel Like Christmas” with Stefani in the video below. They made a great team, and are so deserving of their win!