By Manly Bryant on April 30, 2019
Advertisement 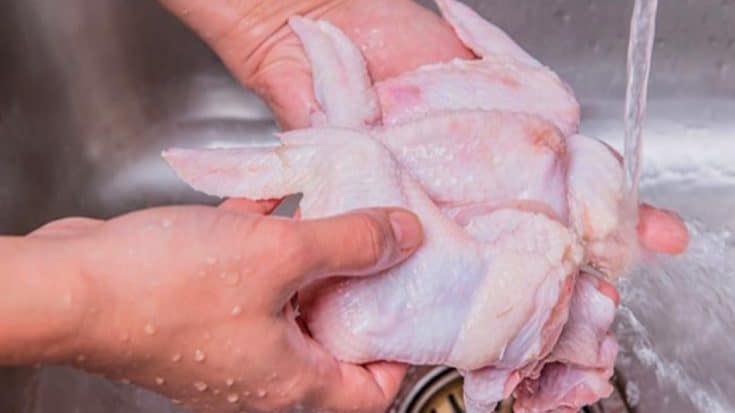 Everybody has witnessed their mama, grandma or babysitter wash off raw chicken before cooking it. Why is it just now coming out as an unwise thing to do?

Don’t wash your raw chicken! Washing can spread germs from the chicken to other food or utensils in the kitchen. https://t.co/QlFpd1alG3 pic.twitter.com/bLB1ofcuh7

According to the Center for Disease Control (CDC), you are making a mistake when you wash your raw chicken before cooking it. Apparently after performing a scientific study, it’s been found that it can spread germs from the chicken to other food and utensils. Some of these germs are clostridium perfringens bacteria, campylobacter bacteria and salmonella.

It’s proven that around one million people per year suffer from food poisoning while eating poultry and the CDC has finally spoken up about it. They said that because most people are running luke warm water over their chicken in an attempt to clean it, that actually increases the chance of spreading germs because germs are more likely to survive in the warmer water.

Luke warm water dripping off your raw chicken hits the counter tops, sink and is all over your hands which usually ends up on the other food, utensils, dishes, etc.

We’re still washing chicken over here. Then we’re going to wash the dishes/utensils bc we’re not dumb.

We’re still washing chicken over here. Then we’re going to wash the dishes/utensils bc we’re not dumb.

been eating chiccen that washed in the sink for the past 17 yrs , and i’m fine.

This recent statement by the CDC has got a lot of people fighting back against it saying that they’ve always rinsed their chicken off before cooking it, just like their parents and grandparents did before them. So why stop now?

Not everyone is happy to hear about how not washing your chicken is better. However, the debate is definitely on and the comments on the tweet are pretty entertaining. Share with us on Facebook what your opinion is on washing raw chicken before eating it.