By Jennifer Pernicano on February 25, 2020
Advertisement 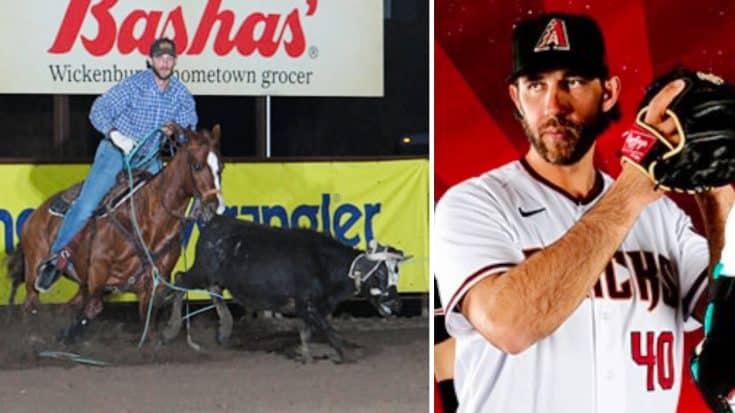 When most people hear the name Madison Bumgarner, they think of one of the most well-known Major League Baseball pitchers.

Bumgarner currently plays for the Arizona Diamondbacks, but made a name for himself on the San Francisco Giants. With the Giants, he won the World Series three times (2010, 2012, 2014) and in 2014, was named the World Series MVP. He also has two Silver Slugger Awards, was selected to four National League All-Star teams, and holds the Giants record for most strikeouts by a left-handed pitcher.

In December 2019, he signed a five-year deal with the Diamondbacks for $85 million.

Madison Bumgarner is a D-back! He marked the occasion by joining the #DbacksHotStove Podcast: dbacks.com/podcast

You would think that a man of his caliber in the sport would eat, sleep, and breathe baseball. Turns out that’s not the case.

Just two weeks before signing that deal in December, when he was a free agent, Bumgarner competed in a rodeo in Wickenburg, Arizona. His event? Team roping! According to Rancho Rio’s Facebook page, he and his partner Jaxon Tucker won took home $26,560 in cash as their prize.

His name, Madison Bumgarner, is a little too recognizable, so he competed using the name Mason Saunders. Mason being a shortened version of Madison and Saunders being his wife’s maiden name. As it turns out, he’s actually been competing in team roping as Mason Saunders for quite some time and no one has figured it out until now!

Two reporters from The Athletic saw the Facebook post and spotted his legendary face. On Sunday (Feb 23) while doing some press for Spring Training, Bumgarner was handed the photos posted on Facebook.

“Oh boy,” Bumgarner said. “This is ruining my alias.”

He added that pictures aren’t always taken when he is competing, which is how he’s gotten away with it for so long. My High Plains reports that he competed in a rodeo last March, just two days before a Giants Spring Training game. Bumgarner, who hails from North Carolina, has been roping since he was 15 or 16 years old.

Even though this story is making its rounds, we’re sure Bumgarner/Saunders will continue team roping jut for the love of it.s

Take a look at some highlights from 2018’s Rancho Rio Team Roping event below to get a feel of what Bumgarner has been doing as Mason Saunders!