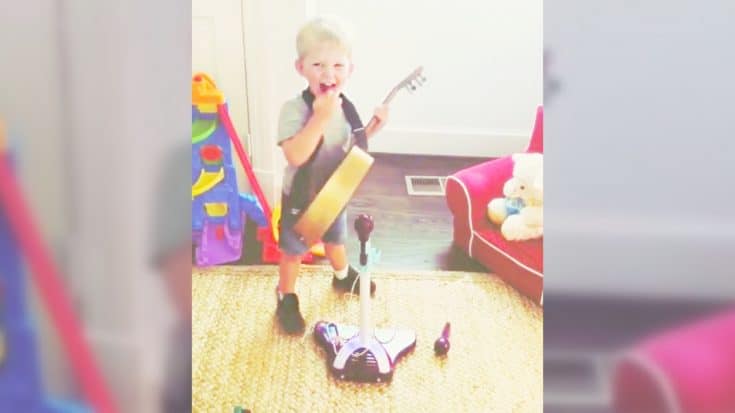 The Lady A Brood Has At Least One Young Music Lover

At this point, the members of Lady Antebellum have enough kids that the youngsters could form their own band! Dave Haywood is a father of two, Hillary Scott has three little girls, and Charles Kelley has a son.

The second oldest of the Lady A children, Ward Charles Kelley was born on February 11, 2016. Since then, he’s been the star of his father’s social media accounts, as he appears in a number of the photos and videos that he shares.

In November 2017, Charles proved that his son may be poised to follow in his footsteps when he shared a video of the little fella singing “Jingle Bells.”

While he hadn’t mastered all of the lyrics, he knew exactly when to chime in with an enthusiastic “Hey!”

Learning some Christmas songs for the first time!

Little Fella Was Born To Be A Star

In the months since that video was shared, it seems that Ward was hard at work on his singing. In July 2018, Charles shared a too-precious video that showed Ward singing again. Only this time he wasn’t singing any old song…he was singing a Lady A tune!

The song that Ward happily rocked out to was none other than Lady A’s hot hit from 2017, “You Look Good.” The song is one that Ward has apparently heard a lot, because he knew the words quite well.

It’s his excitement that makes Ward’s performance all the more entertaining. Give him just a few more years and a little more practice, and he’ll be ready to steal his dad’s spot on stage!

Now that you’ve heard Ward’s rendition of “You Look Good,” check out Lady A’s official music video for the song below. It’s fun to listen to, so it’s easy to understand why Ward has such a good time singing it!