Chicken Gets Into Standoff With Police Officer

By Manly Bryant on July 5, 2019
Advertisement 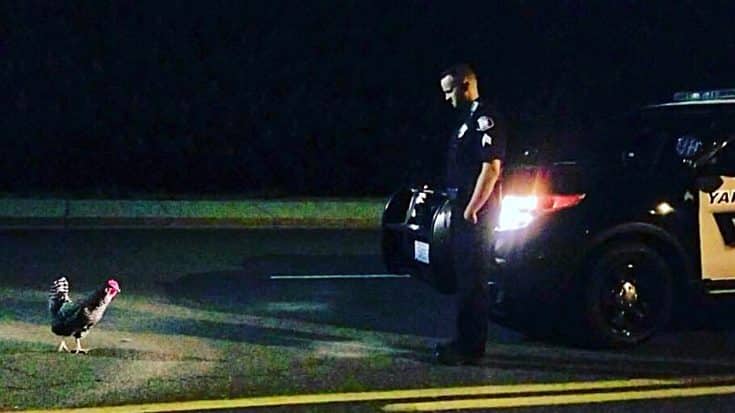 Why did the chicken cross the road? Apparently because he wanted to get into a tense standoff with the Yakima Police Department.

That’s right, according to the YPD, a call was made about a chicken standing in the middle of a five-lane road in Yakima, Washington that didn’t want to move once he crossed the street halfway. So the YPD did the right thing, they sent Officer Ira Cavin to the scene to deal with the situation.

“Some nights you arrest bad guys and some nights you have a staring contest with a chicken,” the police department wrote online. “You just never know what a shift can bring!”

Standing Toe-To-Claw With The Officer

Officer Cavin pulled up to the location, got out of his car and walked up to the bird, but the chicken wasn’t intimidated at all. She stood toe-to-claw with the officer in an intense stare-down. Luckily, neither of them pulled out their weapons (guns and beaks) and Officer Cavin was able to escort her to the other side of the road where she ran off into the night.

“I’m not sure exactly why the chicken crossed the road. We’re still investigating that part,” Cavin told news station KIMA TV. “I attempted to question the chicken but he wasn’t really communicating with me.”

No video was recorded of this, only pictures taken. However, there is one story of a chicken attacking cars that got the cops called on it. Watch it in this video below!