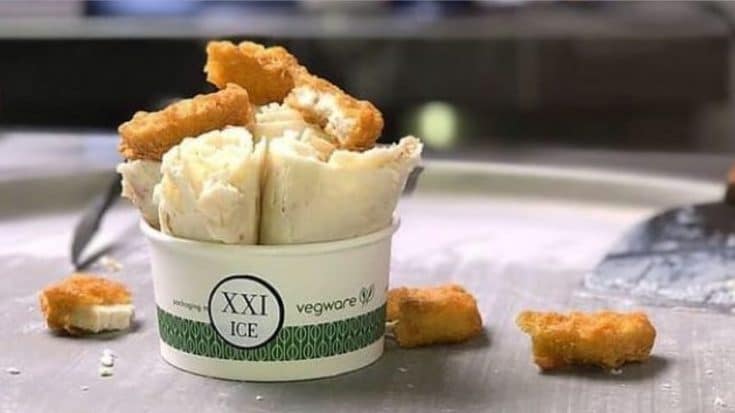 Yep, you read that correctly – chicken nugget ice cream is officially a thing.

The Ireland-based rolled ice cream company XXI ICE recently debuted its latest ice cream flavor…chicken nugget. The sweet rolls of ice cream are garnished with nuggets before they’re presented to the customer, and they also have chopped up bits of the crispy, savory fried meat mixed in with the ice cream itself.

Owner of XXI ICE, Tiernan O’Connor said that he’s heard of people dipping their nuggets into McFlurries when they eat at McDonald’s, so he had the idea to make things easier and place the nuggets directly in ice cream. He had his employees try the new flavor first, and some of them weren’t so sure about the unconventional combo. O’Connor said, “My team tasted it and got very mixed reactions. Some really liked it and some not very much!”

If you’re enthused about this weird combo, you’ll need to jump across the pond to give it a try, as XXI ICE ice cream is only available in Ireland at this time.