By Jennifer Pernicano on July 11, 2018
Advertisement 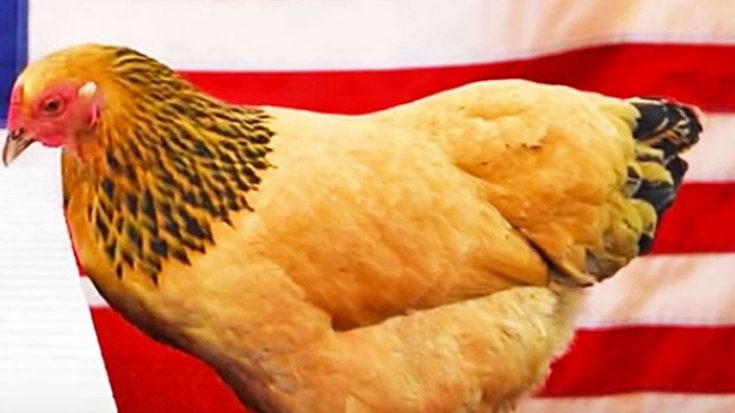 Being the world’s most talented chicken isn’t easy. If you can catch Jokgu the piano-playing chicken between acts, she’ll tell you, “It’s for the birds.”

Jokgu, famous for her musical abilities, has been transported far and wide for her unbelievable patriotic revues. While traveling, the hefty hen probably ponders the age-old question of why the chicken crossed the road.

The three-year-old Buff Brahma Bantam, a member of the all-chicken band, the Flockstars, might realize she’d be tarred and unfeathered if she revealed the answer to this historical riddle.

Besides, who would believe the chicken was crossing the road to get to a music recital. Chickens can’t play musical instruments. Unless that chicken is Jokgu, of course.

Colors Are The Key

Shannon Myers, co-owner of Jokgu’s coop, said the multi-talented hen’s name comes from Korea and translates to a popular type of football/soccer game.

Jokgu was taught at an early age to distinguish colors. When colors were applied to a keyboard, she could readily perceive them and accurately peck out most any musical tune.

Jokgu has appeared on America’s Got Talent where she received a standing ovation for her “peck-tacular” performance of “America the Beautiful.” The international Flockstar has also performed opera works, several patriotic songs and her peeps are now preparing her to play a country western melody on her claw-struck keyboard.

How did Jokgu’s co-owner get into this fowl business?

“My chicken coop partner’s family, of Asian heritage, immigrated here,” Myers explained in an interview with The Huffington Post. “We wanted Jokgu to play something [on her keyboard] that I thought at the heart is so true ― that America is Beautiful.”

“And,” she added, “what better ambassador than a Chinese breed chicken with a Korean name playing an American anthem?”

Her Talent Is Nothing To Bawk At

It was also Jokgu’s ability to play the piano/keyboard that earned this chick a place in the world-famous Ripley’s Believe It Or Not. Instead of sitting around watching chick flicks, the hen perfected her performance of “The Star Spangled Banner,” much to the delight of media everywhere.

Because Jokgu has enjoyed such an eggscellent response, the requests for personal appearances have skyrocketed. She has recorded several videos from her coop in Germantown, MD and posted her musical performances on social media to help satisfy the curious, and appease her ever-growing fanbase.

Her talent is nothing to bawk at.

Ready for an out-of-this world performance? Kick back and maybe even sing along as this charming chicken pecks out our national anthem.

Don’t know all the words? No worries. Just wing it. She does.

Thoughts? Did you ever think this to be possible? Anything you’d like to hear her peck?