Chicken Wipes Out While Sledding 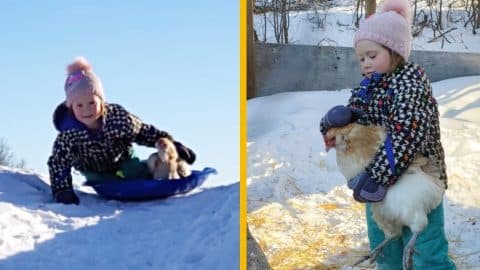 Tenille Poole has no idea why her daughter decided to take her pet chicken, Chickyboo, sledding, but the results are adorable.

Over the past weekend, Lennon Poole, a four-year-old who also appears to have some skills as an animal whisperer, picked up her blue plaster sled and headed for the snow with a feathered friend. In the video, Lennon sits her pet chicken in the sled on the top of a hill. To her mother’s surprise, the chicken sits perfectly still, even as Lennon takes the animal on a ride down the bank of snow.

“I don’t know where she comes up with most of her ideas,” Tenille admitted in a statement obtained by CBC News. “I asked her about it and she said, ‘Mom, it wasn’t an idea. It was a plan.'”

While the initial ride down the hill went smoothly, both Lennon and Chickyboo suffered a rough landing. The chicken flipped out of the sled before jumping back to its feet. Tenille remarked that Chickyboo is a reasonably calm chicken. Still, she admitted the animal probably did not enjoy the sledding adventure as much as Lennon.

“You take her back to her friends, please. We’re going to have scrambled eggs tomorrow,” Tenille jokes in the video.

Lennon also has a bond with the other animals on her family’s farm. The four-year-old has also thrown her dogs birthday parties and staged tea parties with the farm’s pony aside from sledding.