Tears Will Roll After Watching This WWII Veteran’s Patriotic Sendoff

By Jennifer Pernicano on October 22, 2018
Advertisement 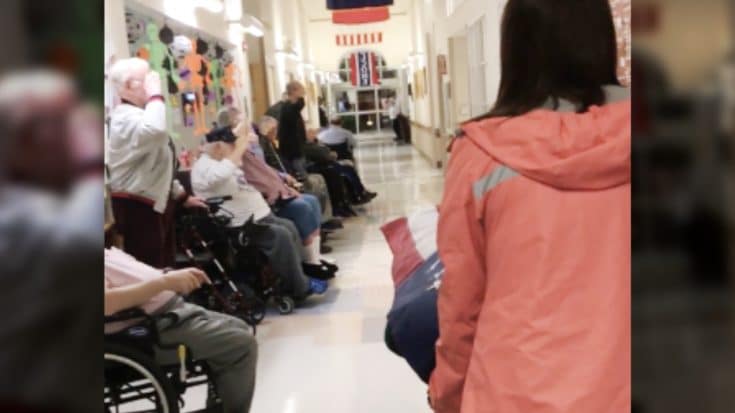 This story is guaranteed to give you chills.

World War II veteran Aleck A. Primos passed away on Tuesday, October 16, 2018 at at the State Veteran’s Home in Oxford, Massachusetts. Aleck’s daughter, Claudia, explained on Facebook that he became a Naval Officer during his junior year of college and “served in China behind enemy lines training Chinese Guerilla’s [sic]4.”

Aleck A. Primos passed away peacefully on Tuesday, October 16, 2018 at the State Veteran’s Home in Oxford, MS. Aleck…

Aleck was discharged from the Navy in 1946 and went into the restaurant business, but was always a proud veteran. While he vowed to live until he was 107, Aleck passed away at 95 1/2 on October 16.

After his passing, the staff at the Veteran’s Home draped him in an American flag and wheeled him out of his room. What happened next was incredibly chilling. As they turned the corner to walk down the main hallway, the song “Taps” began playing over the speaker system and the halls were flanked with residents of the home – all veterans.

The tradition of “Taps” being played at every military member’s funeral began with Captain John Francis after a friend of his was denied permission to fire three guns over the grave.

A Respectful And Fitting Sendoff

As Aleck’s body passed them, all the veterans stood if they were able to, saluted him, or put their hand over their heart to honor a fallen hero.

“As Daddy was carried out of the VA last night, his body was draped with the US flag,” Claudia wrote on Facebook. “The veteran residents lined the halls to salute him as ‘Taps’ was played. All staff members were there, too. Such honor and deserved respect shown there for our men who fought so valiantly for our country.”

Claudia filmed this for her brother and sister who weren’t able to be there and posted it on her Facebook page. The video has now been viewed over 14 million times, with over 64,000 comments from people paying their respects to Aleck.

Thank you for your service, Aleck, and may you rest in peace. Our thoughts and prayers go out to his three children, nine grandchildren, and 12 great grandchildren.

Make sure you watch the video in its entirely – it will give you chills.

"Life with Father"Daddy was a lieutenant in World War II,serving in China behind enemy lines training Chinese guerilla fighters.As Daddy was carried out of the VA last night, his body was draped with the US flag. The veteran residents lined the halls to salute him as "Taps"was played. All staff members were there ,too. Such honor and deserved respect shown there for our men who fought so valiantly for our country.I took the video for my brother and sister, because they were not able to be there with me. Thought you might appreciate this too, since you've traveled this journey with him and appreciate the honor all of our veterans deserve.