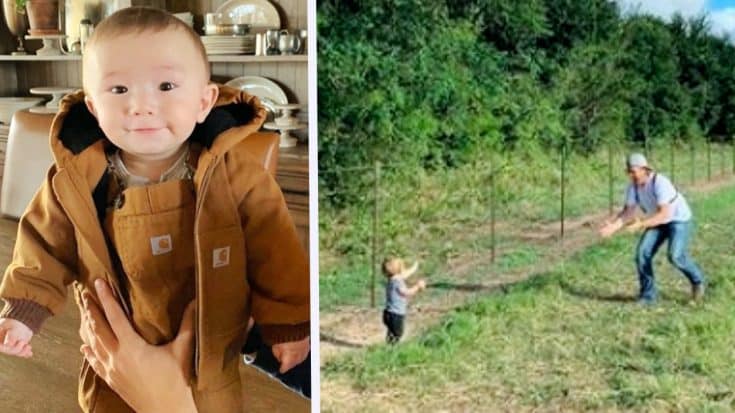 Life has been quite exciting for little Crew Gaines these past few weeks!

The youngest of Chip and Joanna Gaines’ five children, Crew just celebrated his first birthday in June. Joanna marked the occasion by sharing some of her favorite photos from the day of his birth, as well as a few never-before-seen snapshots.

“One year ago. What a gift you are to all of us sweet boy,” she wrote to accompany the photos.

One year ago. What a gift you are to all of us sweet boy ❤️

With so much on their plate (a new TV network, a new rug collection, a new cookbook, etc.), Chip and Joanna weren’t able to host Crew’s first birthday party right away. But we’re sure the little guy didn’t mind…because once his party finally occurred, it was every one-year-old’s dream!

The nautical-themed gathering was decorated with colorful paper ships and buoys. Crew also got the chance to chow down on a simple, but delicious-looking cake, which his dad Chip also seemed to enjoy.

Ok I promise this is the last round of Crew's bday photos (for today ?), I just can't get over the fact that he is ONE and I also just really love his squishy legs. ?: @kathrynkruegerphotography

But Crew’s first birthday isn’t the only milestone that the Gaines family is currently celebrating!

Just days after Chip and Joanna shared photos from Crew’s party, Chip took to Instagram to share a picture from another exciting day in his son’s life. The photo shows father and son out in the pasture on what we assume to be the Gaines’ farm, standing a few feet apart.

Both Chip and Crew are seen reaching out as they move toward one another, which was the cause of Chip’s celebration. That’s because the photo captures the day Crew took his first steps!

“Little crew took his 1st steps today.. It was a good day!” Chip wrote in the caption. Sounds like a good day to us!

Little crew took his 1st steps today.. It was a good day!

Congratulations to Crew on taking his first steps! Chip and Joanna better watch out, because he’s sure to be on the move in no time at all.

We’ve loved watching Crew grow up over the past year. You watched his brothers and sisters grow up on their parents’ hit show Fixer Upper, yet we bet there’s still so much you don’t know about them. You can learn more about Drake, Duke, Ella Rose, and Emmie Kay by tuning in to the video below.

Crew will soon be able to keep up with his older siblings now that he’s walking!