By Jennifer Pernicano on July 17, 2019
Advertisement 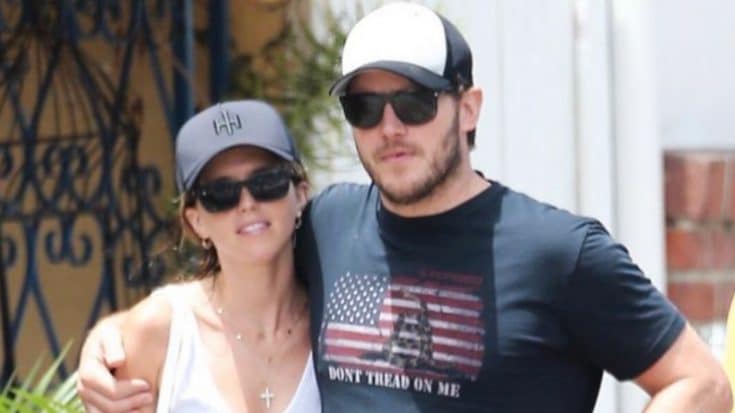 The actor who has a deep-rooted love for country music is stirring up controversy – all because of a t-shirt he wore.

Chris Pratt, who is famous for his starring roles in the Jurassic World and Guardians of the Galaxy franchises, was out for an afternoon stroll in Los Angeles with his wife Katherine Schwarzenegger when paparazzi took some photos of them.

Pratt was wearing a t-shirt featuring the American flag with a coiled rattlesnake in front of it. The words “Don’t tread on me” were below the images.

According to Fox News, “The coiled rattlesnake and the ‘Don’t tread on me’ motto are from the iconic Gadsden flag, which was created by American general Christopher Gadsden in 1775 during the Revolutionary War. It was meant to symbolize liberty and freedom.”

The Tea Party has revived the flag in recent years.

After the photos surfaced, Yahoo published an article titled, “Chris Pratt criticised for ‘white supremacist” T-shirt,” which said that “although it is one of the symbols and flags used by the U.S. Men’s Soccer Team, Metallica, as well as some libertarian groups, over the years the flag has been adopted by Far Right political groups like the Tea Party, as well as gun-toting supporters of the Second Amendment.”

Yahoo continued, “It has therefore become a symbol of more conservative and far right individuals and, according to the Equal Employment Opportunity Commission of the US, it also is ‘sometimes interpreted to convey racially-tinged messages in some contexts.’”

The article included several tweets, with one accusing Pratt of wearing a shirt “emblazoned with a white supremacist dogwhistle.”

Since Yahoo’s article caught traction, and criticism themselves, they changed the title to, “Chris Pratt criticised for T-shirt choice.”

People online are not happy with Yahoo’s article, but some are still upset with Pratt’s t-shirt choice, even calling for his career to be “cancelled.”

Check out some reactions from both sides below.

Just when you think outrage culture has crested to its new norm, enter Yahoo news.

Apparently Chris Pratt is a white supremacist for wearing a don't tread on me t-shirt…in America…where it's stood for individual freedom for hundreds of years.

Oh and it's Chris Pratt. ?? pic.twitter.com/l7zfziCdcg

The centuries-old Gadsen flag is a symbol of freedom, and if you think Chris Pratt is a white supremacist, you are perhaps dumber than @Yahoo for running this moronic shithttps://t.co/nCykBIa7Zn

This is pure idiocy. Not every symbol of the early republic is a white supremacist symbol, unless you are a moron. https://t.co/zWT7GZK602

I like him, but all these small things about his politics makes me wonder when he’ll say something transphobic, tank his career, and do the full heel-turn into a Fox commentator https://t.co/Emfzd02GmK

Unfollowed already. Haven't liked him since Parks & Rec anyhow, and I can easily cancel him in that too. @prattprattpratt hope those bigots pay you a good pay check. Bye girl. https://t.co/2yuS7IZmtu

Fox & Friends defends "American icon" Chris Pratt against "bull[ies] … saying that he's racist" for wearing a Don't Tread On Me shirt: "There is just a group of people in this country that are hellbent on protesting anything patriotic." pic.twitter.com/Ve35Wjr3jf