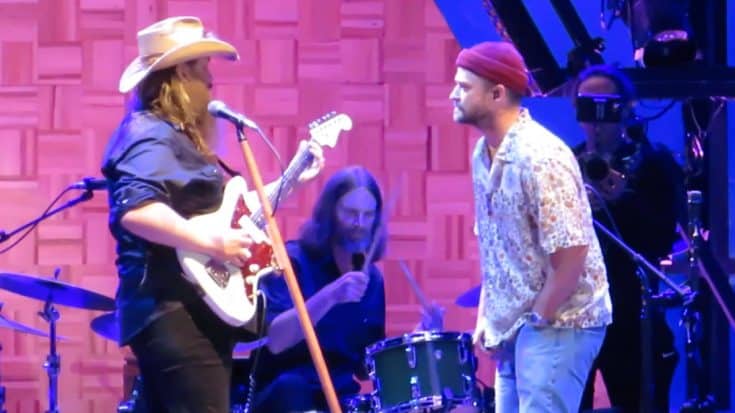 Seven years ago Chris Stapleton’s life changed in a big way when he took home the rare Triple Crown of awards at the 2015 CMA Awards. But, it wasn’t only his victory in the Best New Artist, Male Vocalist of the Year, and Album of the Year categories that set put the singer on the country music map.

During Stapleton’s 2015 CMA Awards appearance, he was also joined by pop star Justin Timberlake for a performance of “Tennessee Whiskey” and “Drink You Away.” While most pop performances are frowned upon during a country music awards show, this collaboration was different. Fans couldn’t get enough of the duo, as evidenced by the millions of views the videos of the two garnered online.

During a concert held at Los Angeles’ Kia Forum on Friday night (June 10), Stapleton surprised the crowd by inviting Justin Timberlake to join him on stage to relive their iconic CMA Awards show duet.

“I guarantee that most of you probably know me because of this man I’m about to bring onstage,” Stapleton said as he introduced Timberlake. “He’s one of the greatest musical artists that has ever lived.”

Friday’s concert wasn’t the first time Stapleton and Timberlake have reunited since their epic CMA performance in 2015. In September of 2017, as Timberlake headlined the Pilgrimage Music & Cultural Festival in Franklin, Tennessee, he brought Stapleton and his wife, Morgane, on stage for an encore performance of their memorable CMA collaboration of “Tennessee Whiskey,” as well as Stapleton’s “Fire Away” and “Sometimes I Cry.”

Not only is Timberlake a huge fan of Chris and Morgane Stapleton, but he credits the couple for inspiring him as an artist and as a “good man.”

The admiration is mutual, according to Stapleton. “Having Justin in the room elevates everybody — not just everybody on the stage, but everybody in the room,” Chris said in 2015. “He’s that guy, he has that kind of talent.”