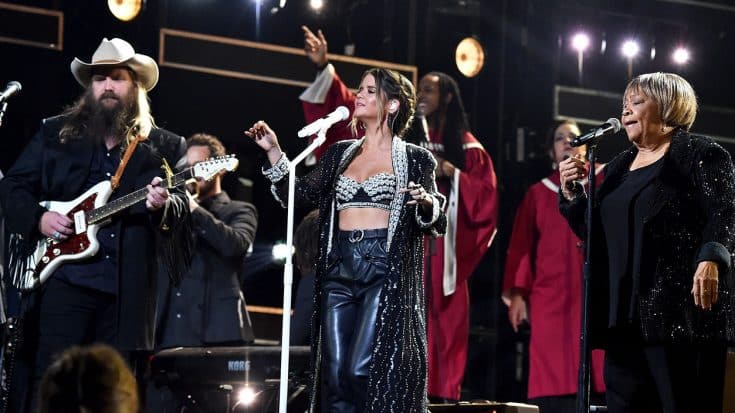 It’s not unusual for the CMA Awards to be full of unforgettable performances and nominees. From the awards won to performance collaborations, it is one powerful night of country lovin’ memories. Just last week, the CMA announced one collaboration that will be taking place at the 52nd annual ceremony and fans are going nuts. Country music stars Chris Stapleton and Maren Morris were joined by R&B and gospel singer Mavis Staples.

Chris Stapleton is no stranger to the CMA Awards. The “Tennessee Whiskey” singer has previously won seven CMA awards including 2015 and 2017’s Male Vocalist of the Year. This year, Stapleton was nominated for seven nominations.

Maren Morris has been a powerful force in the country music world lately. Her girl power anthems and heartbreak melodies have brought her quickly to the top of the charts for a well-deserving spot. Last year, Morris released an earth-shattering collaboration with Vince Gill called “Dear Hate” shortly after the Route 91 shooting. The duo is up for a Musical Event of the Year nomination for their song. Morris is also nominated for Female Vocalist of the Year.

The legendary Mavis Staples paired alongside the two vocalists for one memorable performance. Staples was inducted into the Rock and Roll hall of fame in 1999 and the Blues Hall of Fame in 2017.

The trio appeared on stage each ready to bring their own flavor. The group of talented singers began by singing Stapleton’s “Friendship.” Stapleton started off the performance with his deep raspy vocals before harmonizing with the ladies and choir. Morris, who came dressed to impress with a sparkly crop top and leather pants, sang the next verse solo. Her vocals took over the stage with flying colors. It was when the iconic powerhouse, Mavis Staples began to sing that soul really poured out onto the stage.

After the bridge, the stage lit up and the choir came to life. Dancing and singing in harmony, the trifecta stunned the audience with their array of talented voices. They switched up the tune by singing two of the Staple Singers’ classics “I’ll Take You There” and ending it with “Mercy.” Stapleton tore up his guitar for the ultimate guitar solo before Staples came back in for her solo. Smiles filled the audience as this unlikely trio put on the most riveting and lively performance together.