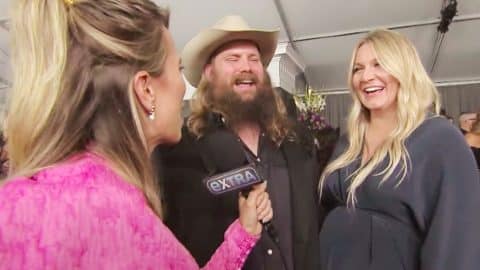 All About The Stapleton Children

Chris and Morganne Stapleton already have a large family, and it’s about to get even bigger!

Prior to last year, Chris and Morganne were parents of two…a son and a daughter. But their number of children doubled in size when Morganne gave birth to twin boys in April 2018.

She shared a picture of the two babies on her Instagram, which was quite remarkable considering the fact that Chris and Morganne had never shared photos of their eldest kids before, and still haven’t.

Thank you for all the love! We’re so grateful to finally be home with our sweet family. We would like to say a special thank you to all the incredible nurses & doctors at Centennial Women’s & Children’s Hospital in Nashville. At more than a month early, we had a week long stay in the nicu & the incredible people there kept our boys healthy & happy. Words cannot express our gratitude for you all & what you did for our family. From the bottom of our hearts, thank you! ♥️♥️

Even though the couple was willing to share that photo of the twin boys, they did not reveal their names. This follows the same pattern they established with their eldest son and daughter, whose names they kept secret for some time.

The Stapletons Add One More To Growing Brood

Chris finally said his eldest kids’ names publicly when accepting his award for Male Vocalist of the Year at the CMA Awards in November.

“Waylon and Ada, if you’re out there tonight, and the twin boys, and the one on the way, I love you so much,” he said.

Did you catch that part where he said “one on the way“? That’s right…Morganne was expecting again…just months after welcoming her twin boys into the world!

Her baby bump was on full display as she and Chris walked the red carpet at the Grammy Awards.

The two stopped to chat with Extra‘s Renee Bargh, who wanted to know what Morganne thinks of Chris’ famous love songs. On top of writing and recording his own romantic works, Chris co-wrote what is known as one of the steamiest songs in country music…Josh Turner‘s “Your Man.”

What Morganne Thinks Of The Romantic Tracks

Knowing how much “Your Man” and Chris’ other love songs make other women swoon, Renee wanted to know if Morganne has a similar reaction. “I can’t even imagine if my man could say those things or put them into a song,” Renee said.

Morganne had a hysterical response to that, looking down at her baby bump with a smile and saying, “Yeah, we stay pregnant.” That not only got a laugh out of Renee, but Chris as well!

You can watch how the priceless conversation unfolded by tuning in to the video below.

We’re so happy for the Stapletons….their new baby, a little boy, arrived in May. From the sounds of what Morganne said, if Chris keeps writing such good love songs, we may end up seeing even more additions to the their family in the future!