By Manly Bryant on April 8, 2019
Advertisement 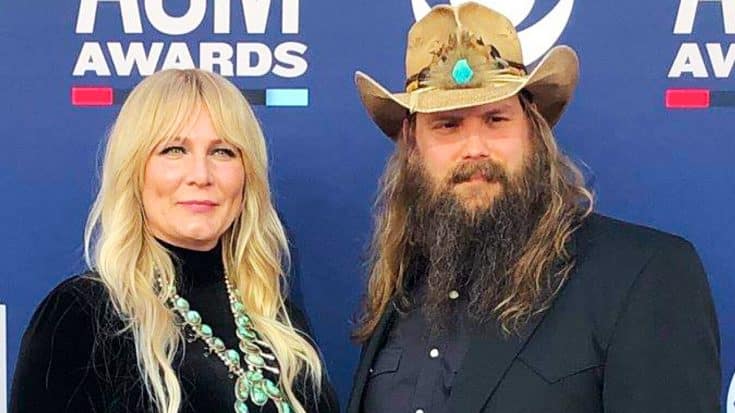 As stars flooded the red carpet last night for the 54th annual ACM Awards, there were a handful of couples who really stole the show. From Luke and Caroline to Carrie and Mike, you can bet sparks were flying on and off the camera. But fans were really loving one country mama, whose glowing smile and growing belly took the spotlight.

Some of the amazing looks from the #ACMAwards last night ????: Getty

Chris Stapleton and his wife, Morgane never disappoint when it comes to red carpet events. While Chris keeps it simple with a cowboy hat and all black, Morgane usually dazzles the crowd with her gowns. For this year’s event, Morgane arrived in a long-sleeved velvet black dress, with her gorgeous blonde locks lightly waved. She accessorized with colored jewelry and eyeliner.

But her most memorable accessory was her baby bump!

Just seven months after giving birth to their twin boys, Chris and Morgane announced that baby No. 5 was on the way! While performing a show at Madison Square Garden, Chris told the audience about the big arrival receiving a roar of support from fans. The couple also has another son and daughter whose names they keep private.

Following their red carpet debut, the pair took the stage for a breathtaking performance together. Singing “A Simple Song,” off his 2017 album, Chris stunned the audience with his smooth vocals. The song was written by Chris and his father-in-law, Darrell Hayes, making it quite the emotional performance.

Wishing the Stapleton family all the best and we can’t wait for baby No.5 to arrive!