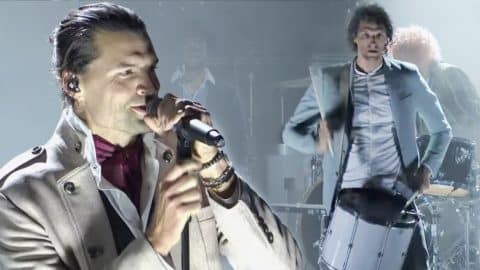 The special has aired every year since 2010, with Jennifer Nettles acting as its original host. Reba McEntire took over hosting duties in 2017, and Yearwood took over this year. News of her hosting was announced in September, which was when the special was filmed.

🔔 Ring in the holiday season with #CMAchristmas, hosted by @TrishaYearwood, with special holiday performances & unforgettable collaborations. 🎄🎶 Tickets for the Sept. 25 taping in Nashville, TN go on sale THIS FRIDAY at 10 AM|CT on https://t.co/LAr9cvJAAV. pic.twitter.com/mcso8MNxBV

You may know for KING & COUNTRY, comprised of Australian brothers Joel and Luke Smallbone,  from their successful career in the Christian music world. They also recently teamed up with Dolly Parton for a version of their song “God Only Knows.” They joined her at this year’s CMA Awards to perform it.

The brother duo double dipped CMA shows and lent their voices to the CMA Country Christmas special with a unique take on the song “Little Drummer Boy.” Luke started out the performance on the snare drum with Joel and the rest of their band standing stoically behind him.

Slowly, each instrument was introduced and finally, Joel sang a melody – after banging on a huge bass drum a few times! Then, in perfect harmony, the duo sang the classic lyrics before diving into an awesome musical break that had the entire audience cheering.

Not only were the people in attendance loving it, so were viewers on YouTube. Check out some of the reactions below.

“This performance was one of the most powerful I have ever seen. I was awestruck. Covered in goosebumps. I could feel the Holy Spirit all around me. WOW.”

“One of the better live performances I’ve seen on tv in a while, well done gentleman!”

“I just watched this on the special, there are no words, amazing is as close as I can get,but so inadequate. The hair on the back of my neck stood up. Just so joyous a celebration!”

And that is just the beginning!

Watch their performance below to see for yourself.