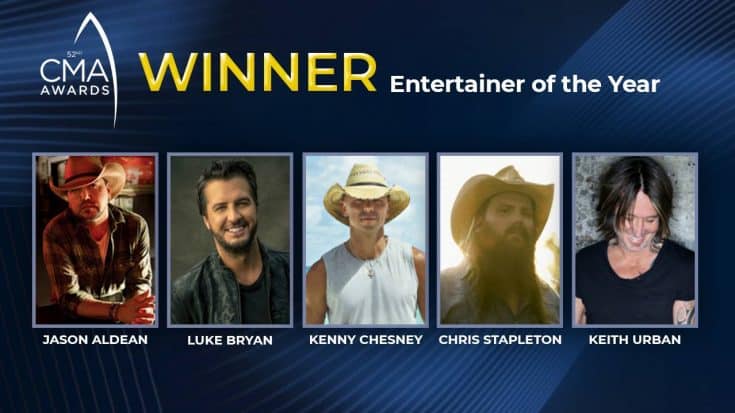 First awarded at the 1967 CMA Awards, this is one of the most coveted honors in all of country music…and for the last two years, the title was held by none other than Garth Brooks – and he was well-deserving of the title after breaking ticket sales records repeatedly in the years leading up to it.

The award has been one of the most notable parts of country music accolades and carries with it a deep, rich history…along with some wild twists!

Today in 1975 Presenter Charlie Rich lights fire to the envelope when John Denver wins Entertainer of the Year during the 9th annual CMA awards at the Grand Ole Opry House in Nashville. Denver also takes Song of the Year with "Back Home Again". https://t.co/4PbZjbUAd6 pic.twitter.com/6Na5hP1Isl

Brooks, who holds the current seat as Entertainer of the Year, is preparing to pass the torch to one of five new nominees – three of which are previous recipients of the awards!

Together, Luke Bryan, Keith Urban, Kenny Chesney, Chris Stapleton, and Jason Aldean have been put up for the biggest award of the night and are all excitedly awaiting the results during this major country ceremony.

Who should win 'Entertainer of the Year' at the CMA's next week?? https://t.co/4WZlDqLe4T

For the first time in 13 years, the CMA Entertainer of the Year went to none other than country music’s beloved Australian superstar – Keith Urban!

His emotional win caught him by surprise and he broke into a teary-eyed acceptance speech after a touching moment with his wife Nicole Kidman where they embraced joyfully at their seats.

Last award of the night for Entertainer of the Year goes to @KeithUrban #CMAawards2018 pic.twitter.com/zIhP73Yfoq

Watch Keith Urban perform at the CMA Awards below and send your congratulations to him in the comments below!

#ARIAs host @KeithUrban owning the US stage for all of us Aussies back home! #CMAawards pic.twitter.com/n010eFUTna