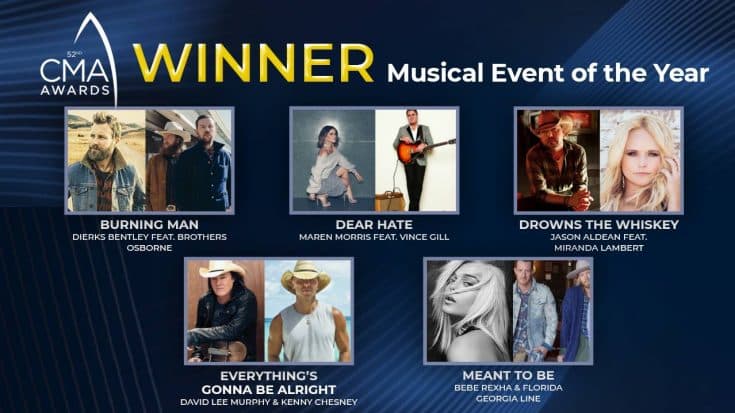 It’s been another year full of incredible country music collaborations, and Wednesday morning five of those were recognized and one walked away with the coveted CMA Awards Musical Event of the Year trophy during an announcement during Good Morning America’s live broadcast from Nashville.

The winner of the 2018 Musical Event of the Year is “Everything’s Gonna Be Alrighty” by David Lee Murphy and Kenny Chesney!

The @countrymusic awards have OFFICIALLY started! @laraspencer and @adaripp announce the winner of the Musical Event of the Year award live from Nashville! #CMAawards pic.twitter.com/uvc77KAMLR

The collaboration between Murphy and Chesney was one that almost didn’t happen. Murphy had settled into life as a songwriter after riding high on the success of his mid-90s hits, “Dust on the Bottle” and “Party Crowd.”

He had songs cut by some of the new generation’s biggest stars, including Jason Aldean, Luke Bryan, Blake Shelton, Thomas Rhett, Brad Paisley and more. But, it was Kenny Chesney who wasn’t content just singing David Lee Murphy-penned songs. He wanted more.

“I sent [Kenny Chesney] some songs for one of his albums a couple of years ago, and he called me up. He goes, ‘Man, you need to be making a record. I could produce it with Buddy Cannon, and I think people would love it,'” Murphy recalls. “It’s hard to say no to Kenny Chesney when he comes up with an idea like that.”

David Lee was joined by Kenny on the track “Everything’s Gonna Be Alright” and it was released as the first single from Murphy’s new album, No Zip Code in November of 2017. The song gave Murphy his first No. 1 hit since “Dust on the Bottle” topped the charts 23 years ago.

Congratulations to David Lee Murphy and Kenny Chesney on their CMA Awards win! Hear their award-winning collaboration below.

Tune in tonight as Carrie Underwood and Brad Paisley team up for the 11th consecutive year to host the CMA Awards. They will air on ABC starting at 8 p.m. EST.