By Miranda Raye on September 19, 2022
Advertisement 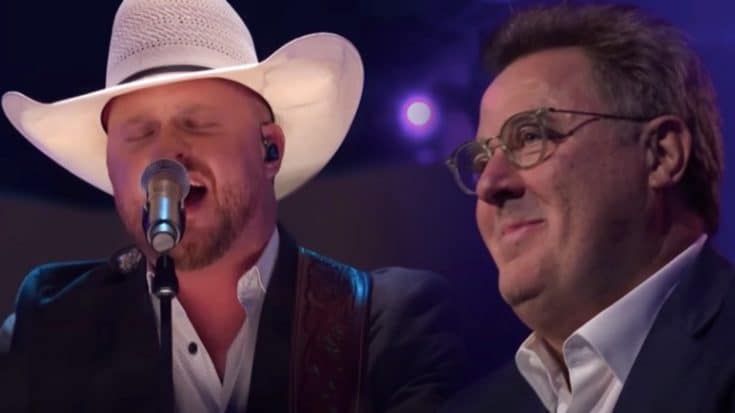 Vince Gill was honored during a CMT Giants special that aired on September 16. Various artists gathered at the theater at Belmont University in Nashville to sing some of his signature songs.

Gill did know the names of the performers, but he did not know which songs they were singing. So as each new artist took to the stage, he was completely surprised by their performances.

Cody Johnson had the honor of singing Gill’s iconic song from 1990, “When I Call Your Name.” The song reached the second spot on the Hot Country Songs chart and led Gill to a Grammy win in the Best Country Vocal Performance, Male category.

Before he sang “When I Call Your Name,” Johnson spoke about how much he admires Gill. Johnson explained how he met Gill for the first time that night, and how much that meant to him:

“…when I shook your hand tonight, it was very apparent to me that I was shaking the hand of greatness,” he said. “Something that was said earlier is you said you dedicated your life to country music. I personally want to thank you for that, because it’s given me the courage to dedicate my life to country music.”

Johnson said that when he thinks about male vocalists he was influenced by as a kid, he thinks of Glen Campbell, Merle Haggard, George Jones, and Gill.

After his speech, Johnson moved into his performance of “When I Call Your Name.” His powerful voice was the perfect match for the song.

Whenever the camera cut to show Gill, you could see that he was completely mesmerized by Johnson’s performance. He put his hand over his heart and gave him a thumbs-up at the end of the song, and Johnson removed his hat as a sign of respect.

Check out Johnson’s cover of “When I Call Your Name” in the video below. We always love watching artists pay tribute to the greats who paved the way for them.