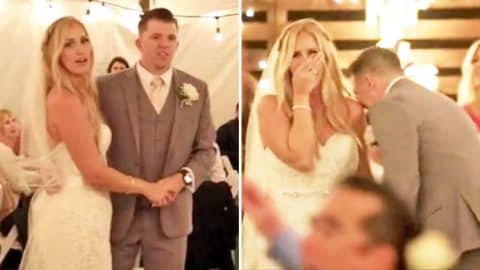 This Northern California couple was about to celebrate their marriage by taking part in a years-long tradition – the first dance. They carefully chose a song that was extremely meaningful to them, country singer Coffey Anderson’s ballad “Better Today.”

The bride and groom began dancing to a recording of the widely popular song with their friends and family watching on. Little did they know, the couple’s family pulled off a huge surprise by inviting Anderson to sing “Better Today” live for the couple.

After a few seconds of the the romantic dance, the song started sounding off. All of a sudden, the music faded away, and the DJ said, “Uh oh, there’s something wrong with my equipment, hold on. Give me one second, let me work on it.”

Moments later, Anderson appeared from behind the tent playing his guitar. The couple completely freaked out and so did all the guests. They could not believe Anderson, who rose to stardom on the show Nashville Star, was actually singing for them at their wedding!

The happy couple was able to complete their first dance, thanks to Anderson’s live acoustic performance and it will be a moment neither of them will forget.

Watch the incredible moment below!

bride and groom get surprise

Bride and Groom get the ultimate Surprise! WARNING: Tear jerker. SHARE and TAG.