Colorado Man Fights Off Mountain Lion Like A Badass

By Jennifer Pernicano on February 6, 2019
Advertisement 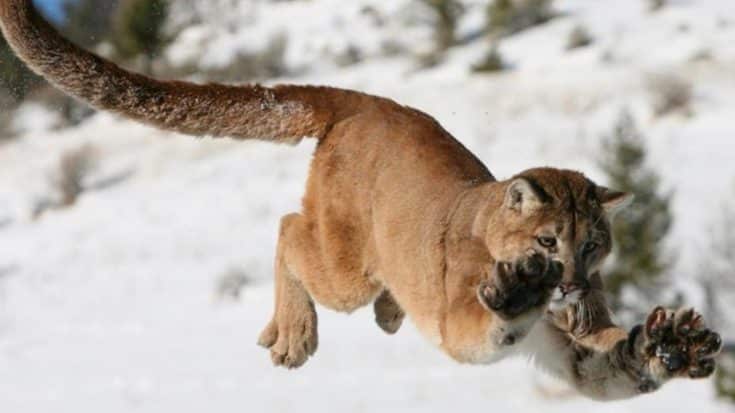 A Colorado man went for a trail run on Monday (Jan. 4) and it turned into a harrowing experience.

While running on the West Ridge Trail at Horsetooth Mountain Open Space in Fort Collins, the man heard something behind him. When he went to turn around, a mountain lion attacked him, biting his face and his wrist. Fox31 Denver reports that he had puncture wounds on his arms, legs, and back.

Somehow, he managed to break free to defend himself, fight back, and ultimately suffocated the mountain lion with his bare hands.

“The runner did everything he could to save his life,” Mark Leslie, Colorado Parks and Wildlife’s northeast regional manager, said in a statement. “In the event of a lion attack you need to do anything in your power to fight back just as this gentleman did.”

The man, who hasn’t been named in the media, was able to walk back to his car and drive himself to the hospital. Experts say the cat was a juvenile mountain lion, which probably gave the man an advantage when fighting back. The mountain lion was recovered and taken to a lab for tests, where it tested negative for rabies.

According to a post on Facebook from the Colorado Parks and Wildlife, mountain lion attacks are “not common in Colorado.”

On Monday, Feb. 4 at Horsetooth Mountain Open Space a trail runner was attacked by a juvenile mountain lion. The victim…

Posted by Colorado Parks and Wildlife on Tuesday, 5 February 2019

Because of this incident, and additional mountain lion sightings, Horsetooth Mountain Open Space will be closed and the situation will be reassessed on Friday, February 8.

Horsetooth Mountain Open Space is closed due to additional mountain lion activity in the area. We'll reassess the…

This incident could have easily had a completely different outcome, and we are happy to hear that he is “doing well considering his ordeal.”

Yahoo reports, “Mountain lions are quiet, solitary, elusive predators that typically avoid humans, but authorities said it’s important to remain alert if you’re in an area where they live.” The Colorado Division of Wildlife offered these tips if you should encounter a mountain lion:

Do not approach a lion, especially one that is feeding or with kittens. Most mountain lions will try to avoid a confrontation. Give them a way to escape.