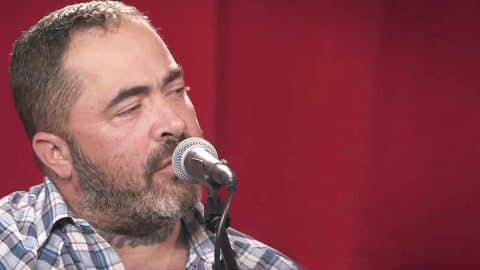 Country music had no idea what it was in for when Aaron Lewis released his second solo album, Sinner. The album shook up the country charts, establishing Lewis as one of the most powerful players in the genre.

On its debut, Sinner appeared at the number one spot on the Top Country Albums chart. In addition, the album claimed the fourth spot on the all-genre Billboard 200 upon its debut, making it a crossover success.

According to Roughstock, Sinner has sold a total of 146,800 copies in the U.S. since it was released in September 2016. A huge force that helped drive those sales numbers was his single “That Ain’t Country.”

“That Ain’t Country” was written entirely by Lewis. Serving as a reflection on the state of modern country music, Lewis looks back to the legendary artists that his “Grandad used to play.” He expresses a desire to hear similar sounds and artists in today’s age.

As one of his hottest singles, Lewis has made a point to play “That Ain’t Country” almost everywhere he goes. Fans have been loving it at shows, and videos of his various performances have gathered thousands of views online.

One of Lewis’ most popular performances of “That Ain’t Country” is one he filmed while visiting radio station New Hit Country 102.5 out of Boston, Massachusetts.

Since Lewis has personal connections to Massachusetts, it made perfect sense for him to pay a visit to the station.

Those who have only heard the album version of “That Ain’t Country” will enjoy Lewis’ radio station performance of the song, because it’s an acoustic rendition. The only instrumentals you’ll find in this performance are an acoustic guitar and a dobro. Now that’s country!

The stripped-down arrangement gives listeners the chance to focus on the lyrics more than ever before. It’s like hearing “That Ain’t Country” for the first time all over again.

Tune in below to watch Lewis’ radio station performance of “That Ain’t Country.” Then let us know which version you like best. The album version? Acoustic version? We can’t decide!