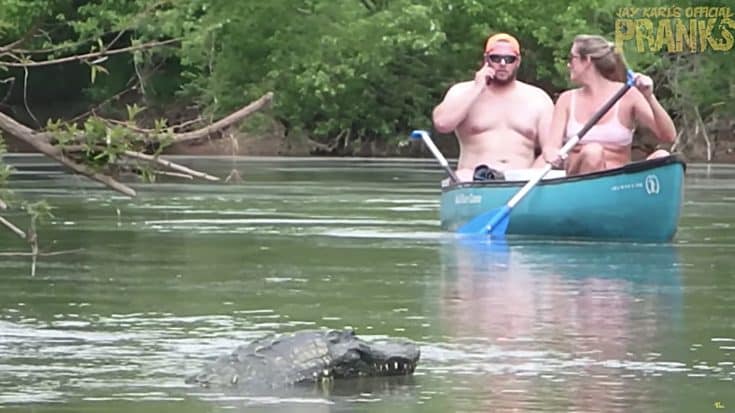 One of the most freaky things about swimming in dark green murky water is not knowing what is swimming underneath you. But what will really get you scared for your life is being out on the water and seeing an alligator swimming towards you.

Famous YouTuber, Jay Karl buys a remote control fake alligator head from Amazon and brings it to a lake to see how many people he can prank with it and it’s super hilarious!

The first girl he gets with it is enjoying the sun rays on an inflatable unicorn float when you hear Jay yell “Yo! Behind you!” The girl turns around and sees what she thinks is a real gator. She instantly panics and starts kicking her legs and paddling trying to get away.

She Thinks It’s a Real Gator

Realizing she’s not moving fast enough she jumps ship abandoning her float and leaving her oar behind to swim as fast as she can towards the shoreline. Once she almost reaches dry land she looks up to see Jay laughing and recording her with one hand and while controlling the fake gator with the other.

She reaches down to grab a handful of mud to throw at him as she cusses him out. It’s totally comical! Jake goes on to prank many others in the video and does a really good job at it.

You’ve got to watch the full video below to see all the pranks.