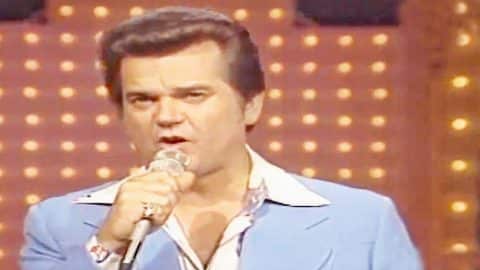 From the second Conway Twitty heard “I See the Want to in Your Eyes,” he knew he had to record it.

The song was originally recorded by honky-tonk singer Gary Stewart, but Twitty was the one who transformed it into a timeless hit.

Released in July 1974 off of his album I’m Not Through With Loving You Yet, “I See the Want to in Your Eyes” was one of the best songs of Twitty’s career. It topped the country chart in both the U.S. and Canada, and earned the distinction as one of Twitty’s signature songs.

But the tune was brand spankin’ new when Twitty performed it during a round of TV shows that aired in 1974.

Twitty’s performance proved that he had a career-defining hit on his hands.

Standing alone on stage, Twitty used his solitary status to allow himself to connect with the audience. He looked around the room as he sang the song’s seductive title line, “I see the want to in your eyes.” We’re sure that everyone’s eyes were hooked on Twitty when he sang that!

As a further way of connecting with the audience, Twitty made sure to turn on the charm in his performance. Seeming completely in to the character of the song, he flashed the crowd several smiles as he looked around the room.

This performance proves just how skilled Twitty was as an entertainer. At the flip of a switch, he was able to dive into his song’s character and make the audience believe the story he was singing. That’s a sign of true talent!

Tune in to the clip below to watch Twitty charm the socks off of the crowd who watched him sing “I See the Want to in Your Eyes.” We’re sure his swoon-worthy performance will leave a lasting impression on you as well!