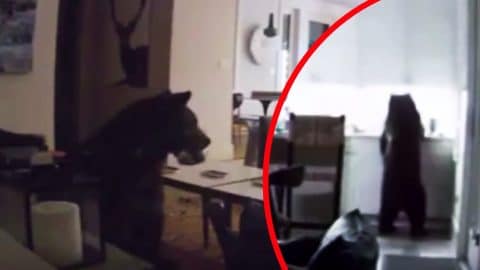 When Hayes Sherman and his friend Bobby Harden heard some noise coming from the kitchen on Sunday night (August 18), they originally assumed it was Hayes’ mom rustling around. But as the noise became more aggressive, they realized it wasn’t Hayes’ mom after all.

Bobby told ABC 10 News their first thought was “this could be a bear.”

They were right on the money, because the source of the noise was indeed, a hungry bear that managed to break into the home. According to the Placer County Sheriff’s Office, the bear got inside the house after it snuck in through an open garage door, which was then closed behind it.

Hayes and Bobby called 911 as soon as they realized what was going on. A security camera in the kitchen filmed the bear’s actions as Hayes and Bobby waited for help to arrive.

The break-in at a home in Truckee was caught on the family’s home security camera. https://t.co/udlmaNjoXK

The bear checked the kitchen counter for snacks before raiding the fridge.

“The bear took two Ben and Jerry’s pints from our freezer and shredded them open and ate them all and took our taco meat from the fridge,” Hayes said.

When Placer County Sheriff’s Deputy Allyson Prero responded to the call, she spoke with a third person inside the house, identified simply as the “homeowner.”

While Hayes and Bobby stayed in another room and the homeowner remained upstairs, Deputy Prero opened the front door so the bear would have a way to get outside.

Although the bear came out of the house as soon as Deputy Prero opened the door, it didn’t flee right away. So she fired a “bear round” from her shotgun to scare the bear, and then it finally ran away into the nearby forest.

Thanks to Deputy Prero’s bravery, no one in the house was harmed by the bear. Though now they do need to replenish their ice cream supply. And Hayes says his mom also had to clean their carpet, because in addition to eating their food, the bear left a “present” for them in the living room!

You can watch home surveillance footage of the bear’s break in by tuning in to the news report below.